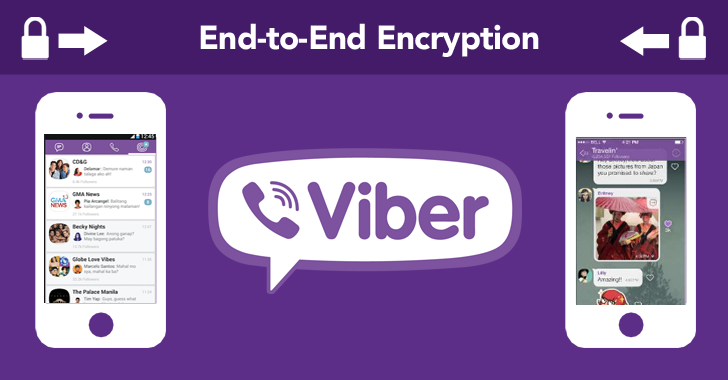 Viber, the popular mobile messaging app announced Tuesday that it has added full end-to-end encryption for video, voice and text message services for its millions of users.

Here, the end-to-end encryption means only you and the person you are communicating with can read the content, and nobody in between, not even the company and if court orders company to provide user data, they will get only the heaps of encrypted data.

Viber is the latest messaging platform to join WhatsApp, Telegram, and Apple iMessage, who strengthened their default privacy features in recent times.

Founded in 2010 and acquired by Japanese e-commerce titan Rakuten for $900 Million in 2014, Viber is currently being used by more than 700 Million users globally across Android, iOS, Windows Phone, and desktop, the company claimed in a blog post published today.

The move comes just a couple of weeks after Facebook-owned Whatsapp messaging app implemented full end-to-end encryption by default for its one billion users.

Besides offering end-to-end encryption on all communication, the company will also provide a new PIN-protected hidden chat feature to help its users hide conversations from the main chat list, as well as Contact Authentication feature to verify contacts you're talking to.

All users need to update their app with the latest version of the company's software, Viber 6.0, take advantage of the features.

Once installed, your Viber app will now show you a padlock in conversations to confirm that your one-to-one and group messages are end-to-end encrypted.

However, users will probably need to wait few weeks before everyone's app updates to add the new end-to-end encryption on Android and iOS.

In the wake of Apple's months-long battle with the Federal Bureau of Investigation (FBI) over an iPhone used by a San Bernardino terrorist, it seems like end-to-end encryption has become a trend and you'll continue to see this in more applications and services.