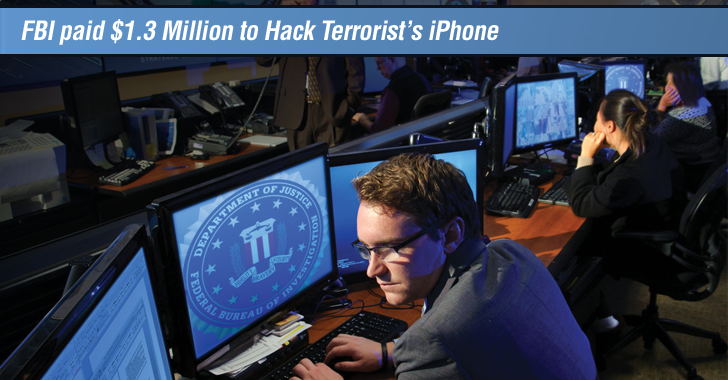 Guess how much the FBI has paid an unknown grey-hat hacker to break into San Bernardino Shooter's iPhone?

FBI Director James Comey hinted during an interview that the FBI spent more than $1.3 Million for breaking into the iPhone of a suspected terrorist and found nothing useful on it.

Apple's legal battle with the Federal Bureau of Investigation (FBI) ended following the bureau's announcement last month that it bought a hacking tool to break into the locked iPhone 5C belonging to the alleged San Bernardino shooter Syed Farook.

At the time, the FBI did not disclose the name of the third party neither it revealed the cost of the hacking tool.

But yesterday while speaking at the Aspen Security Forum in London, FBI Director James Comey gave a hint on the price it gave to the unnamed "outside party" for the hacking solution after Apple refused to help the agency bypass the iPhone's security mechanisms.

The FBI Paid Over $1.3 MILLION for Nothing Useful


When Comey was asked how much the FBI paid for the zero-day flaw that allowed the agency to break into Farook's iPhone, Comey replied: A lot.


"More than I will make in the remainder of this job, which is seven years and four months for sure," said Comey.

According to public records, Comey earned $183,000 last year, and without a raise or bonus, he will make $1.34 Million over the remainder of his job. This indicates that the FBI paid over $1.3 Million for the hacking tool.

So, now it's pretty clear that the FBI paid over $1.3 Million for nothing useful, since it has been reported few weeks back that the FBI found nothing significant from the terrorist's iPhone after cracking the passcode.

Moreover, Comey also said the hacking tool the FBI bought works only on an iPhone 5C, and not on later versions of iPhone such as the 5S, 6 and 6S.

But according to Comey, such a huge price for a zero-day that works only on iPhone 5C was "worth it."


"Because it is a tool that helps [the FBI] with a 5C running iOS 9, which is a bit of a corner case," Comey told the audience, adding, "I think it is very, very important that we get into that device."

So far, Comey has attempted to put a positive spin on the terrorist's case, saying he is a "huge fan of strong encryption," but citing his responsibility, he stated that to keep people safe the FBI need to know what the bad people are talking and planning about.