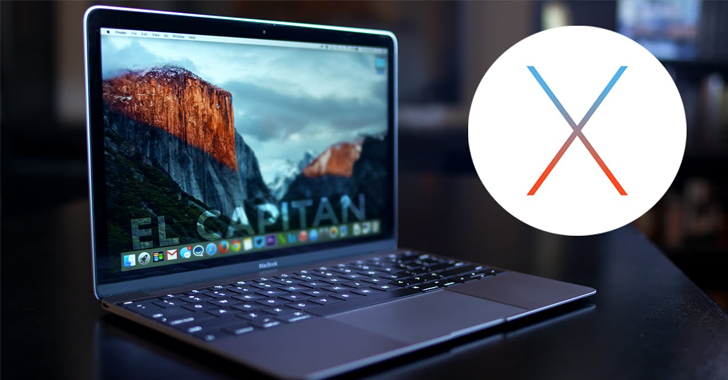 A critical zero-day vulnerability has been discovered in all versions of Apple's OS X operating system that allows hackers to exploit the company's newest protection feature and steal sensitive data from affected devices.

With the release of OS X El Capitan, Apple introduced a security protection feature to the OS X kernel called System Integrity Protection (SIP). The feature is designed to prevent potentially malicious or bad software from modifying protected files and folders on your Mac.

The purpose of SIP is to restrict the root account of OS X devices and limit the actions a root user can perform on protected parts of the system in an effort to reduce the chance of malicious code hijacking a device or performing privilege escalation.

However, SentinelOne security researcher Pedro Vilaça has uncovered a critical vulnerability in both OS X and iOS that allows for local privilege escalation as well as bypasses SIP without kernel exploit, impacting all versions to date.

The zero-day vulnerability (CVE-2016-1757) is a Non-Memory Corruption bug that allows hackers to execute arbitrary code on any targeted machine, perform remote code execution (RCE) or sandbox escapes, according to the researcher.

The attacker then escalates the malware's privileges to bypass SIP, alter system files, and then stay on the infected system.

"The same exploit allows someone to escalate privileges and also to bypass system integrity," the researcher explains in a blog post. "In this way, the same OS X security feature designed to protect users from malware can be used to achieve malware persistency."

By default, System Integrity Protection or SIP protects these folders: /System, /usr, /bin, /sbin, along with applications that come pre-installed with OS X.

According to Vilaça, the zero-day vulnerability is easy to exploit, and a simple spear-phishing or browser-based attack would be more than enough to compromise the target machine.

"It is a logic-based vulnerability, extremely reliable and stable, and does not crash machines or processes," Vilaça says. "This kind of exploit could typically be used in highly targeted or state-sponsored attacks."

The most worrisome part is that the infection is difficult to detect, and even if users ever discover it, it would be impossible for them to remove the infection, since SIP would work against them, preventing users from reaching or altering the malware-laced system file.

Although the zero-day vulnerability was discovered in early 2015 and was reported to Apple in January this year, the good news is that the bug doesn't seem to have been used in the wild.

Apple has patched the vulnerability, but only in updates for El Capitan 10.11.4, and iOS 9.3 that were released on 21st March.

Other versions do not appear to have a patch update for this specific vulnerability from Apple, meaning they are left vulnerable to this specific zero-day bug.