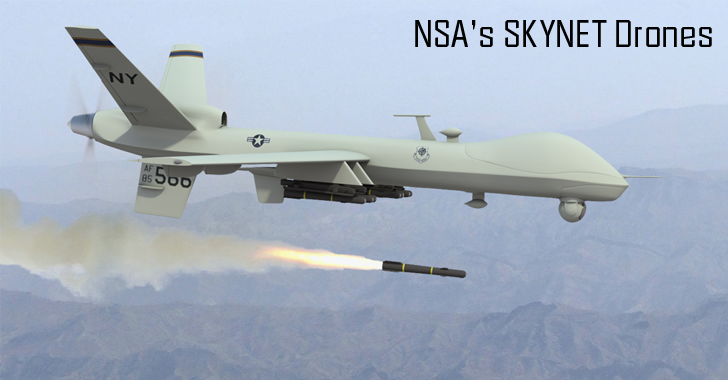 So what do you expect from an Artificially intelligent program run by the government intelligence agency?

The real-life SKYNET, the fictional malevolent artificial intelligence in the Terminator movies, run by the US National Security Agency (NSA) is a surveillance program that uses cell phone metadata to track the GPS location and call activities of suspected terrorists, who may be shot by a Hellfire missile.

Now, a new analysis of previously published NSA documents leaked by former NSA staffer Edward Snowden suggests that many of those people killed based on metadata may have been innocent.

Last year, the leaked documents detailing the NSA's SKYNET programme published by The Intercept showed that NSA had used a machine learning algorithm on the cellular network metadata of 55 Million people in Pakistan to rate each citizen's likelihood of being a terrorist.

You need to know that the US drone bombing campaigns in Pakistan have been raging for years.

However, the spy agency has made elementary errors in their machine-learning algorithm, which lead to the generation of thousands of false leads, potentially exposing innocent people to remote assassination by drone.

One of the leaked slides claimed that SKYNET has a false-positive rate of 0.008%, in some cases, and the NSA was using about 55 million people's phone records for SKYNET.

But, Ars Technica points out that, even at this minute rate, many innocent people are possibly mislabeled. Some of the NSA's tests even saw higher error rates of 0.18%, which means mislabeling nearly 99,000 people out of the 55 Million.

The purpose SKYNET serves is not clear yet. Although SKYNET could be part of non-violent surveillance programs, like tracking and monitoring suspected terrorists, Ars suggests this technology could potentially be used to target drone strikes.

Since 2004, the United States government has carried out hundreds of drone strikes against alleged terrorists in Pakistan and killed somewhere between 2,500 and 4,000 people, the Bureau of Investigative Journalism reported.

The NSA has not yet commented on how the agency used SKYNET, and how the technology was trained.

But Does Killing people "Based on Metadata" actually make sense?

Maybe it is easy to say YES, it makes sense as it happened or is happening far away in a foreign land. But imagine if SKYNET gets turned on us.