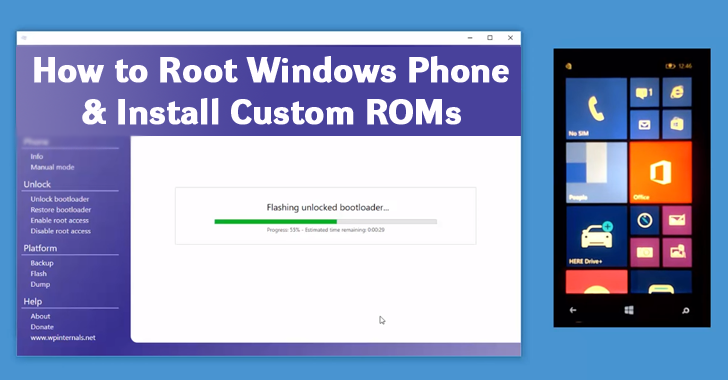 Yes, Now it is possible to unlock a Windows Lumia Phone for Root Access and run custom ROMs.

Both Microsoft as well as Nokia have made Windows Lumia smartphones difficult to break into at a low-level by locking down their bootloaders, but a software hacker, who go by the name HeathCliff, has just proven that it is not impossible.

What's more interesting is the tool supports "most versions of Windows Phone 8.1 and Windows 10 Mobile".

Windows Phone Internals or WP Internals is completely free to download though HeathCliff welcomes donations by those who have found the tool useful.

Here's the List of Things Windows Phone Internals can Do

You can also watch the video provided by HeathCliff, showing what the tool is capable of doing.

How to Get Started?

Here's the introduction video for you to get started with Windows Phone Internals:

Should You Root Your Phone?

However, I would caution against using this tool to root Windows phone for those who do not understand the underlying architecture of their Windows Phones and Windows 10 Mobiles.

Rooting your phone gives you complete control over the OS, but that power can also be misused if you're not careful.

Heathcliff also states that after a tweak is completed, you should unroot your device to reduce the chance of malware or other bad stuff making their way on.

Using the tool without proper inspection could also result in damaged and unrecoverable data, for which neither The Hacker News nor I will be responsible. So please be careful before rooting your Windows Phone.