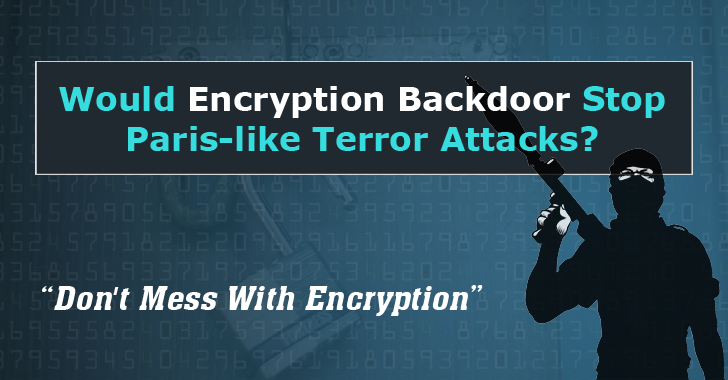 With 129 people killed in Paris terror attacks and dozens critically wounded, the law enforcement and intelligence officials are reviving their efforts to force companies to put some backdoors in encryption so that they can access your information.
How did the Intelligence agencies fail to Intercept terrorist plans of these attacks?
In the wake of the Paris terror attacks, Former CIA Director Michael Morell argued on TV that encrypted communication services may have aided the planning and plotting of the Paris attacks, blaming Edward Snowden and US companies for the attacks.

Also Read: NO, We Can't Blame Edward Snowden and Encryption for Terror Attacks
With more Surveillance and Encryption backdoor, Is it possible that Friday's attacks could have been stopped before they began?
Morell suggested that recalcitrant US companies should be forced to install government backdoors in their software and hand over encryption keys to the government, thinking that Encryption Backdoor could stop Paris-like Terror attacks.

US intelligence and Law enforcement agencies have been warning for years that due to their inability to decrypt communication between computers and phones, they are unable to know what terrorist groups are planning.

Also Read: ISIS Calls Anonymous "IDIOTS" in response to their "Total war" Cyber Threat
But in my opinion, no backdoors can help law enforcement, and intelligence agencies tackle terrorism.
Here's Why:
Forcing US companies to put Backdoors in their encryption software and hand over encryption keys to the law enforcement would not help them catch terrorist suspects who are using their:
You can not stop a terrorist from installing an app made in Russia or Brazil, neither you can stop them creating and using their own encryption apps. In both cases, such backdoors will be useless.

Also Read: Anonymous declares War on ISIS: 'We will Hunt you Down!'
Let's talk about some real examples where terrorist groups and online jihadists have proved that they are already aware of intelligence and law enforcement agencies' ability to track them.

Terrorist groups and jihadists were already making use of – and developing – secure communications software like:
1. Asrar al-Mujahideen (Message and File Encryption Software): Developed in 2007, Asrar al-Mujahideen is a Jihadi-themed encryption software package that encrypts messages and files between users and is promoted as a trusted and secure avenue for terrorist groups to communicate with one another.
2. Asrar Al-Dardashah (Encryption for Instant-messaging Services): Approximately four months before the Snowden's first revelation, GIMF introduced a new software package on February 7, 2013, that allows jihadi users to encrypt live conversations over instant messaging platform including Google Chat, Yahoo, MSN and Paltalk with the multi-platform instant messaging software Pidgin.
3. Tashfeer Al-Jawwal (Mobile Encryption Program): Developed on September 4, 2013, Tashfeer Al-Jawwal provides encryption for SMS messages and files sent on Android as well as Symbian-based mobile phones.
4. Amn al-Mujahid (Android-based Message Encryption software): Launched in late 2013 by Al-Qaida's al-Fajr Media Center, Amn al-Mujahid is an encryption software for online communication with support for Android.

These examples are enough to provide you an overview that forcing companies to install backdoor will only leave us all vulnerable to the same type of surveillance from unauthorized entities, including hackers and spies from China, Russia, and other countries.
So, backdooring encryption software will never be a complete solution.
However, the FBI and NSA will continue their fight for gaining access to encrypted communications through backdoors, and possibly they will try their luck with the next presidential administration in 2017.
Meanwhile, in the wake of the Paris attacks, UK is willing to pass the Investigatory Powers Bill (IPB) that will grant intelligence agencies more powers to collect private communications in bulk.