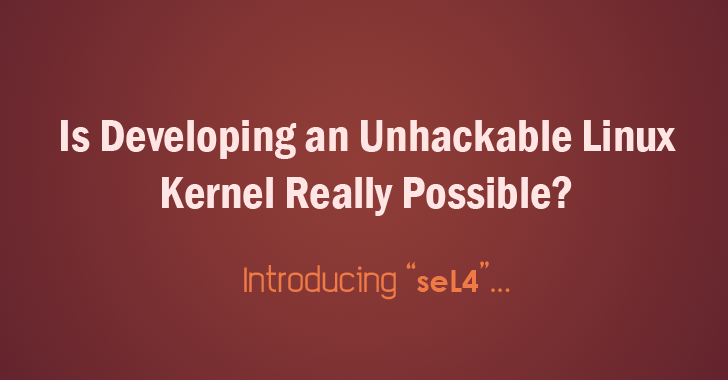 Can you name which Operating System is most Secure?

Yes, we get that! It's not an easy thing to pick.

Besides Windows, Even the so-called ultra-secure Linux Distros were found to be vulnerable to various critical flaws in past years.

Because, almost all Linux Distros use the same Kernel, and the most number of cyber attacks target the Kernel of an operating system. So, It doesn't matter which Linux distribution you use.

Making an Operating System secure requires that vulnerabilities shall not exist in the Kernel, which is the communicating interface between the hardware and the user.

To overcome the above situation, Security Researchers, Mathematicians and Aviation gurus from Boeing and Rockwell Collins joined a team of dedicated NICTA researchers to developed an open source, unhackable bug-free MicroKernel named "seL4".

Recently, 'The Hacker News' wrote an article about Top 7 Brutal Cyber Attacks that Proves No one is Immune to Hacking.

Because — For Hackers, If One Door Closes, They'll Find a New Way to Enter.

However, last year, Researcher proved mathematically that their seL4 kernel is unhackable and promises high-performance with robust Security mechanisms that are even harder to Crack.

According to seL4 website: It is an "operating-system kernel with an end-to-end proof of implementation correctness and security enforcement is available as open source".

seL4 is a 3rd Generation MicroKernel, which is designed to detect & foil hacking attempts. It supports various L4 microkernels features, including:

The researchers explain seL4 with a proof by saying, "...the specification and the seL4 binary satisfy the classic security properties called integrity and confidentiality."

Need of such a microkernel generated because of the increase in development of embedded devices, portable devices and their use in domains like armed forces, medical devices and household devices etc, and related cyber attacks on them.


Yes, Car Hacking... Recently demonstrated by a pair of hackers who controlled a Jeep Cherokee remotely from miles away.

However, Researchers behind kernel development claimed that seL4 will keep systems separate to protect them.

An earlier version of seL4, called OKL4, is already now installed in millions of Smartphones.

Several projects based on seL4 are under development with the aim of conquering a large number of cyber attacks being executed on an operating system as the victim. Also, entities like DARPA, NICTA and CSIRO are engaged in the fulfillment of such projects.