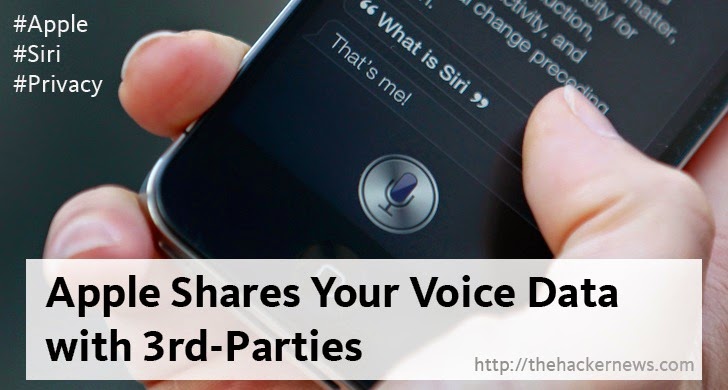 It has been known from year 2013 that commands we have been whispering to Siri are being stored on Apple servers for up to two years for analysis, but this news might be the most shocking development yet.

Apple admits that its Siri — an intelligent personal assistant for iPhone, iPad and iPod Touch devices — is collecting and also transmitting users voice data to 3rd party companies, which was disclosed in an unsurprising revelation two weeks back on Reddit.

FallenMyst, a Reddit user claimed to had recently started a new job with a company called Walk N' Talk Technologies, where job profile requires her to listen voice data collected from Apple, Microsoft users and check for incorrect interpretations.

"I get to listen to sound bites [sic] and rate how the text matches up with what is said in an audio clip and give feedback on what should be improved." Fallenmyst wrote. "Guys, I'm telling you, if you've said it to your phone, it's been recorded…and there's a damn good chance a 3rd party is going to hear it,"

Walk N' Talk Technologies and other similar companies work with Apple and Microsoft to help them improve the accuracy of their intelligent personal assistant applications, Siri, Dictation and Cortana.

"I heard everything from kiddos asking innocent things like 'Siri, do you like me?' to some guy asking Galaxy to lick his butthole. I wish I was kidding", she disclosed.

Apple's iOS Software License Agreement also clearly states that, "By using Siri or Dictation, you agree and consent to Apple's and its subsidiaries' and agents' transmission, collection, maintenance, processing, and use of this information, including your voice input and User Data, to provide and improve Siri, Dictation, and dictation functionality in other Apple products and services."

However, the companies mention deep into their policy agreement that they collect and share your data with their so-called subsidiaries and agents, but those long agreements no one reads and everyone simply clicks, the default option, "accept".

Last year Apple states that to ensure users' privacy and anonymity, they generate a random number to represent each user and associate their voice command with that number, which is obviously not their your Apple user ID or email address.

But, you should be careful about what you say to your personal digital assistant, even if your identity is not linked directly to your voice data.

If you use text-to-speech to send intimate messages, discuss confidential material, or say things that you don't want anyone to hear, Just Beware!, because everything you say to your phone is liable to being listened by bored stranger later.

We reported about similar privacy concerns at the beginning of last month when Samsung admitted that the voice data collected by the Voice Recognition feature of Samsung smart TVs was being "sent to a server" operated by a third party during the process.

With the increase in market of Internet-enabled devices, voice command technology is becoming more ubiquitous, and many consumers rely on those solutions, and this is what companies are taking advantage of.