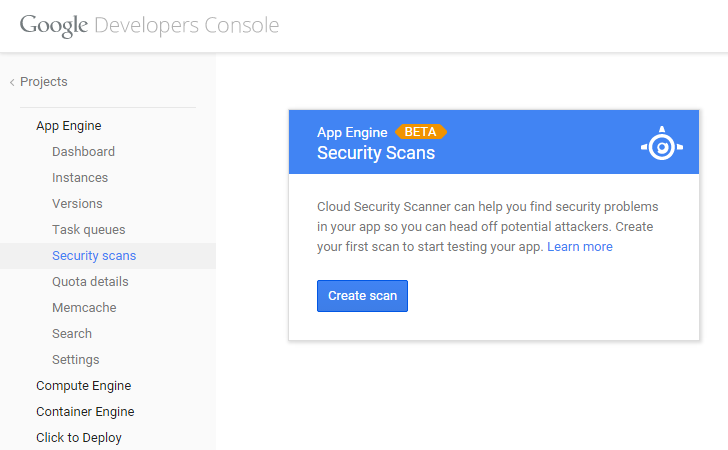 While Google Cloud Security Scanner will be easier for web application developers to use. This web application vulnerability scanner easily scans for Cross-Site Scripting (XSS) and mixed content scripts flaws, which the company argues are the most common security vulnerabilities Google App Engine developers face.

Today, common HTML5 and JavaScript-heavy applications are more challenging to crawl and test, and Google Cloud Security Scanner claims to take a novel approach by parsing the code and then executing a full-page render to find more complex areas of a developer's site.

GO FOR WEB VULNERABILITY SCAN NOW
The developers can access the Cloud Security Scanner under Compute > App Engine > Security in Google's Developers Console. This will run your first scan. It does not work with App Engine Managed VMs, Google Compute Engine, or other resources.

Google notes that there are two typical approaches to such security scans:
Security Engineering head Rob Mann says that their web vulnerability scanner uses Google Compute Engine to dynamically create a botnet of hundreds of virtual Chrome workers that scan at a max rate of 20 requests per second, so that the target sites won't be overloaded.

"Cloud Security Scanner addresses the weaknesses of [real and emulated browsers] by using a multi-stage pipeline," Mann wrote in a blog post. "As with all dynamic vulnerability scanners, a clean scan does not necessarily mean you're security bug free."

The search engine giant still recommended developers to look into manual security review by a web app security professional, just to be on the safer side. However, the company hopes its vulnerability scanner tool will definitely provide a simple solution to the most common App Engine issues with minimal false positives.