The PlayStation 3 has been hacked before, originally with the PSJailbreak dongle and fail0verflow, but Sony managed to fight back with Firmware 3.60 which managed to ingeniously re-secure the console. But Hackers have released a custom firmware which allows compromised consoles to log into PSN, alongside LV0 decryption keys which allow the user to bypass future security updates.

The hacker group 'The Three Musketeers' claims that they already had the keys for a while but decided not to publish them. The information also came into the hands of another Chinese hacking group called BlueDiskCFW which was about to release the Iv0 keys for a fee. To avoid others earning money with their hack, The Three Musketeers decided to publish the keys themselves. Here a Post by Hackers.

The team of hackers released the following announcement:

As this was a group effort, we wouldn't normally have lost a word about it ever, but as we're done with PS3 now anyways, we think it doesn't matter anymore. Congratulations to the guy that leaked stuff, you, sir, are a 1337 haxx0r, jk, you're an asshole.

People should know that crooked personalities are widespread in this so called 'scene'. Some people try to achieve something for fun together and make the wrong decision to trust others and share their results with them, but ofc there got to be the attention seeking fame wh*** that has to leak stuff to feel a little bit better about him-/herself. Now the catch is that it works like this in every 'scene', just that in others it usually doesn't come to light.The only sad thing is, that the others who worked on this won't get the attention they deserve because they probably want to remain anonymous (also they don't care about E-fame <3 data-blogger-escaped-br="br">

PS: This is neither about drama nor E-fame nor 'OMG WE HAZ BEEN FIRST', we just thought you should know that we're disappointed in certain people. You can be sure that if it wouldn't have been for this leak, this key would never have seen the light of day, only the fear of our work being used by others to make money out of it has forced us to release this now. 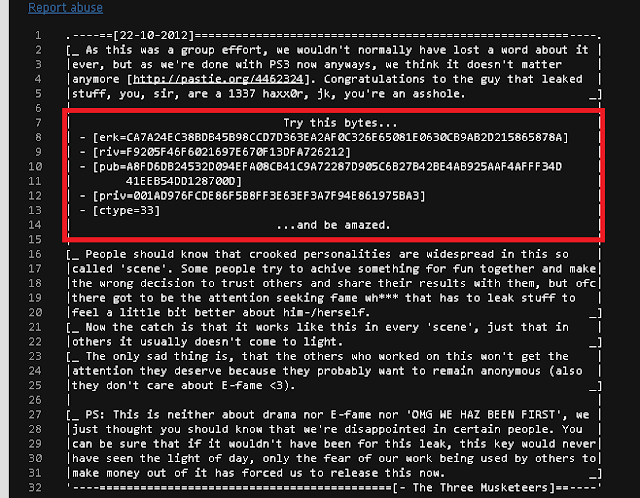 Lets see with Sony's upcoming official 4.30 firmware, it has found a way to block off the exploit.