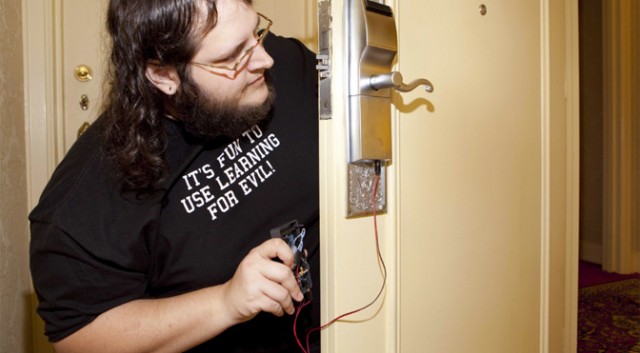 At Black Hat security conference this year Cody Brocious demonstrated that How a simple Dry erase marker allows him to open an Onity hotel room door lock with an Arduino, which is totally James Bond. This is just kind of scary on multiple levels, the least being that dry erase markers are one of the most ordinary, non-suspicious objects we can think of.
Watch the video below and be afraid – be very afraid. It has been refined to such a state where there are no dangling bits that come out of the marker, with a tip that looks totally normal sans any wires.
All you need to do is touch the tip of the market to the door port, and you would have gained entry without mentioning a secret password. The story didn't stop there with Onity, the electronic door specialist in question, stepping in to introduce several measures to secure the doors.

Brocious created a proof-of-concept device to show to security experts and press, but it was a bit crude. In order to build and test all of this yourself you will need the following:
With the parts listed above I was able to build the Arduino circuit and load up the Arduino sketch that Cody provided at his Website. The company responsible for the popular locks, Onity, has promised that it is going to find a fix to this exploit.

In video Hacker demonstrating the $50 security cracking kit and how to make it.