FBI charge Anonymous for stealing CC worth $700000 in Stratfor attack 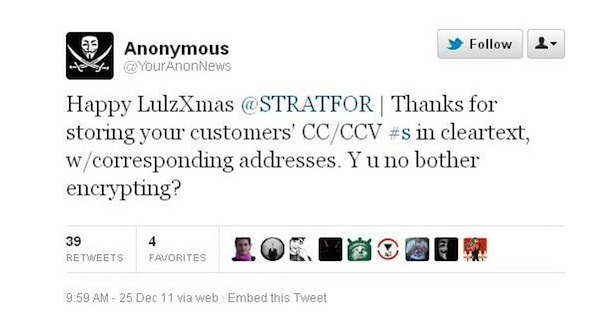 The FBI has revealed that there were $700,000 worth of fraudulent credit card charges after hacktivist group Anonymous stole nearly 200 gigabytes of data, including credit card numbers, from security firm Stratfor. Anonymous hacked Stratfor back in December and fed the resulting emails to Wikileaks for publication.
Anonymous stole a large amount of user names and passwords, in addition to some 60,000 credit card records, after exploiting vulnerabilities to reach Stratfor's servers. At the time, Anonymous said it would use the credit cards to make charitable donations money that would obviously never see the hands of the needy.
FBI's Milan Patel said that the $700,000 figure "does not reflect any of the charges that may have been incurred on cards associated with the Stratfor Hack for which records have not yet been reviewed."

In addition to the credit card numbers and other personally identifiable information, Anonymous also stole emails from Stratfor executives, including chief executive George Friedman.
The damages may still be growing, however. The FBI explained that the $700,000 figure did not include any charges on credit card records that have not yet been reviewed. The number Patel offered the judge only referenced records reviewed between December 6 and early February.
That news might disappoint the conspiracy theorists, but not nearly as much as it does Stratfor and its subscribers, whose personal and financial information was compromised as a result of the attack.