Dave Kennedy (ReL1K), A security ninja & penetration tester develop Another amazing tool for Linux Protection, Named "Artillery". This Article is written by Dave for our January Issue of The Hacker News Magazine, We like to share with our website Readers also:
I've traditionally been on the offensive side of security through my career. With tools that I've developed like Fast-Track and The Social-Engineer Toolkit (SET), it's primarily focused on the attack front. Awhile back I had an idea of creating a more defensive tool around both Windows and *nix systems and keep things open-source as usual. I started Artillery about three months ago with the intent of developing an open-source project that does a bit of everything.
The name "Artillery" spawns from one of my favorite techno bands Infected Mushroom and enhances the overall security of whatever touches it. Artillery supports both Linux and Windows and is a purely open-source/free toolset. The concept is relatively simple; combine multiple avenues to harden an overall platform. Artillery has multiple modules, the first is the active honeypot technique which sets up a number of ports (configurable) on the given server. If a stable TCP connection is established with the remote port, the opposing IP address is blocked. The second portion is the file-integrity monitoring which monitors configured directories to see if changes occurred (similar to OSSEC HIDS). The last portion monitors certain files for configuration flaws, for example default SSH ports, insecure PHP configurations and other aspects.
Installing Artillery
Artillery is programmed purely in python and has native support for Linux and Windows. Thus far, there are no external dependencies required. Some features are not fully functional within the Windows platform however Artillery is still in alpha mode. In order to install Artillery, simply run python install.py install. This will install a service within /etc/init.d/. On Windows, it's the same install however need to manually start Artillery. A service that runs each time is in development and should be finished shortly. 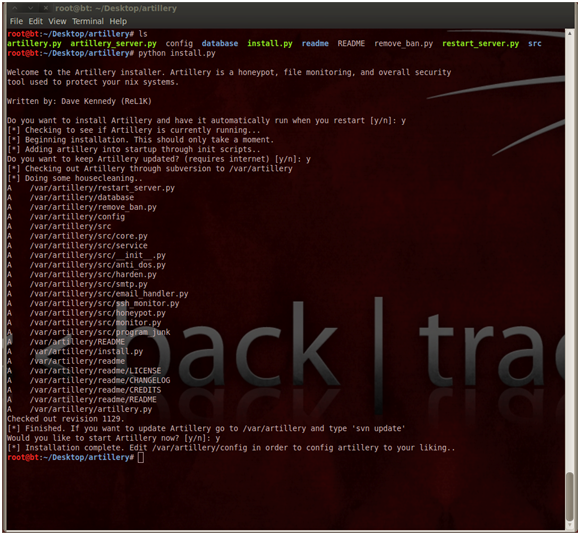