This Post reviews the newly released ANTI3 version. We've received a platinum account of ANTI3, before its official release, and this is our review:
Recently White-Hat Hacker, Itzhak "Zuk" Avraham, the founder of zImperium unveiled its new app in Blackhat / Defcon19, introducing a new concept where both home users and local IT can have the same tools to, at the push of a button, check for their security faults. The new zImperium product, named Android Network Toolkit (or in short - ANTI), allows professional penetration testers, ethical hackers, IT and home users to scan for security issues in their network.
In a few simple clicks ANTI covers the most advanced attack vectors in order to check for vulnerabilities, even those that up until now could only be performed by top-notch penetration testers. This means that while you might think that you're safe because you have a firewall on, with ANTI you can check and prove it (or add it to your penetration testing report if you're doing this as a job). Know if your desktop is easily hackable only a few clicks away by using the ANTI "Penetrate CSE" button, which will perform both MiTM and inject Client Side Exploit to check if you have the latest version of a vulnerable software (e.g: outdated java). You only need to imagine re-producing this using other currently available methods to appreciate why ANTI has gotten so much respect from our community.

"Penetrate CSE" is part of the newly released ANTI3, which covers more vulnerabilities than before. The authors at zImperium will keep improving this product and add even more vulnerabilities in the future.
Upon successful client-side / remote exploitation, the report is updated with the current findings that a specific computer wasn't patched for a certain vulnerability. Performing MiTM and injecting exploits has never been so easy for the professional penetration tester and is now also available for the home-user and the IT - you don't have to be a security guru to run security checks!
ANTI runs on Android version 2.1 and up, while CSE vector only one of several capabilities that makes this tool very powerful, especially when it runs on your smart phone!


ANTI won the "Hack Tool of the Year 2011 Award" by THN, PCMagazine's editor's choice and many other prizes for a reason. Here's a short video describing ANTI's features:
The app is also capable of mapping your network, scanning for vulnerable devices or configuration issues. It is for use by the amateur security enthusiast home user to the professional penetration tester, ANTI provides many other useful features such as: easy connection to open ports, visual sniffing (URLs & Cookies) and - establishing MiTM attacks (using predefined and user-defined filters), Server Side / Client Side Exploits, Password cracker to determine password's safety level, Replace Image as visual in demos and Denial of Service attacks. All this is packed into a very user-friendly and intuitive Android app (and soon to be released iOS app).
As zImperium chose to enable ANTI via their website, rather than through the market, thus the APK is installed manually by a few simple steps:
Go to https://www.zImperium.com/anti.html and follow the instructions there. You will receive a download link to your email. Open this link from your smartphone and then install the app as instructed. (Make sure that 3rd Party Applications is enabled in Settings->Applications->Unknown Sources.)


iOS users can join the list of upcoming (public) BETA testers in the same page, by clicking on the Apple icon. 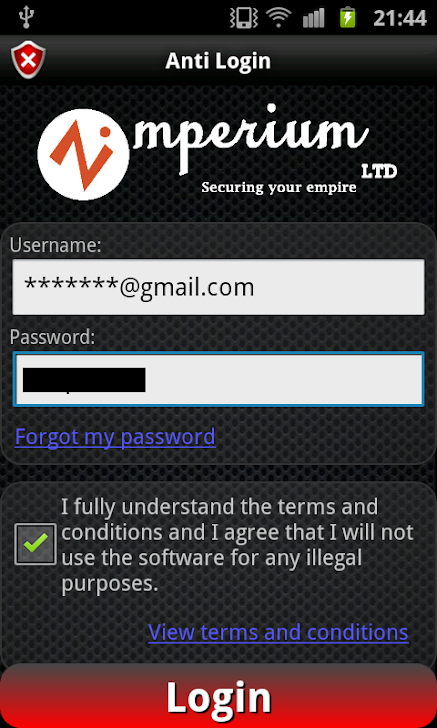 On each run, ANTI will prompt to map the connected network, and when done, it will suggest scanning it for known vulnerabilities and misconfiguration on the targets found. Once a vulnerable target (to remote attacks) is found, it will be marked with red stamp and will appear on the report as a vulnerable device. Displayed in the report is the issue (e.g : MS08-067), how to solve the issue (Windows Update) and how to defend from similar threats in the future (Block port 445 on firewall). 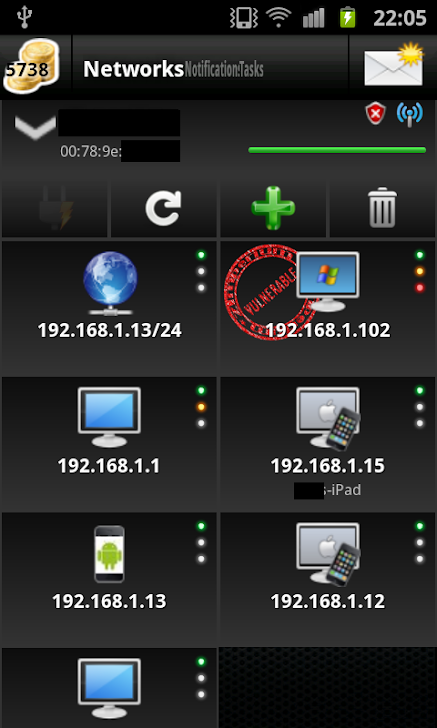 We start by mapping the network - ANTI will scan and detect devices connected to the network. Each device will be displayed with a suitable icon identifying its hardware type and/or the operating system. We can then further scan for vulnerabilities on each of the devices found. 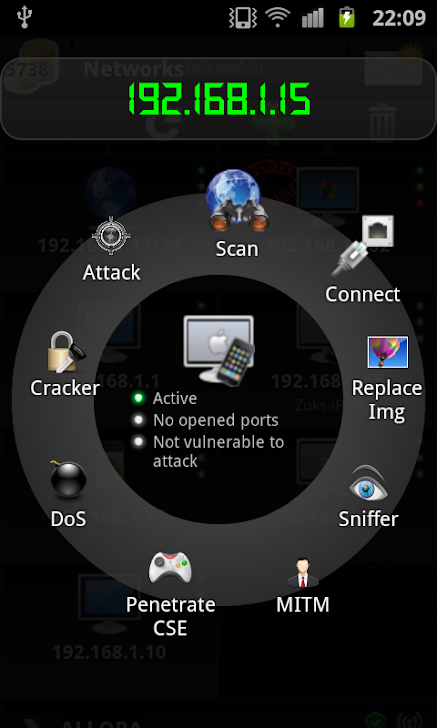 Now that we have our available targets displayed, we can choose any of them to try and penetrate, connect, or sniff network traffic.
The sniffer captures network traffic and displays images, URL's, user/password combinations, and cookies - all this is collected from the target in real-time, and displayed on ANTI for viewing and examining. We can click on any of the URL's/cookies to visit the same site our target is visiting.
ANTI also allows us to connect to open ports on the targets, also displaying the opened ports that were found on previous scans. 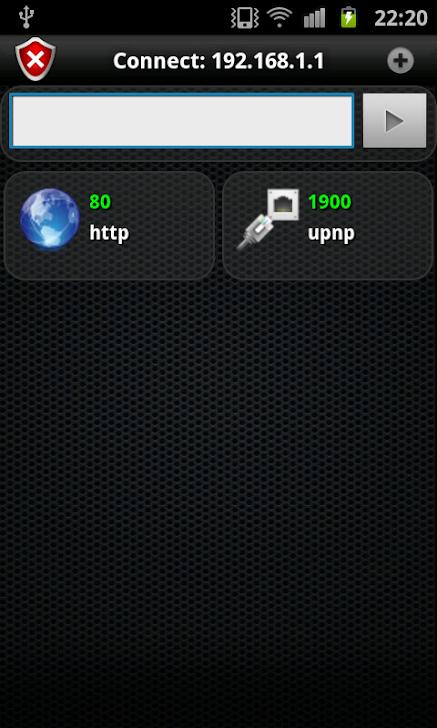 After playing a bit with the app, I feel comfortable enough to try and penetrate one of my computers, running Windows7 or Mac OS X that are updated only to 1 month prior to this report. I choose the target and click 'Penetrate CSE'. This plug-in is injecting javascript code using MiTM into target's traffic and redirect traffic to a URL serving Client Side Exploit. Once the target got exploited, ANTI reveals several functions that can be executed over the exploited target: Send screenshot of the current desktop, execute command. The controller functionality is implemented in a very easy-to-use and fun (!) way, allowing both advanced users and home-users to understand the risks of the found vulnerability - while zImperium censored any real possibility to cause real damage to the target, they allow basic information gathering and real life demos such as ejecting the CD-ROM, or grabbing a screenshot (for the assessment's final report). 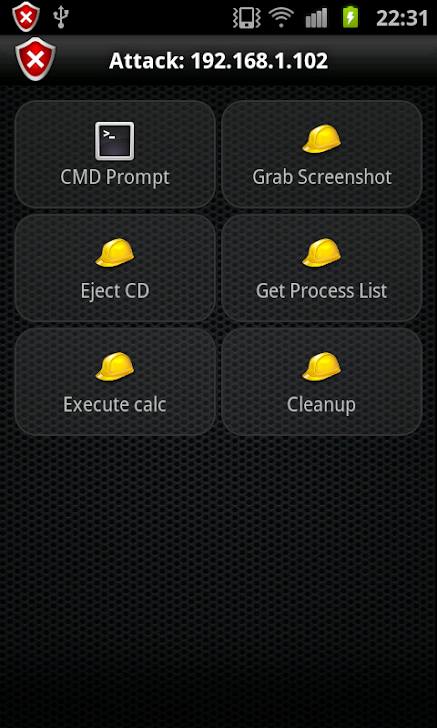 I decided to try the password-cracker on my router. I then realized (the good old hard way) that I better change my password ASAP since it took ANTI less than 30 seconds to crack! Next I executed the cracker on my target running a SQL server and, lo and behold, ANTI didn't discover the passwords - due to use of high complexity passwords. These results were enough to get me to (finally!) change my router's password.
There are additional functionalities built into ANTI, such as a unique and fully functional HTTP server that allows publishing files on your device, as well as uploading files to the device, visual traceroute using google-maps, and more. 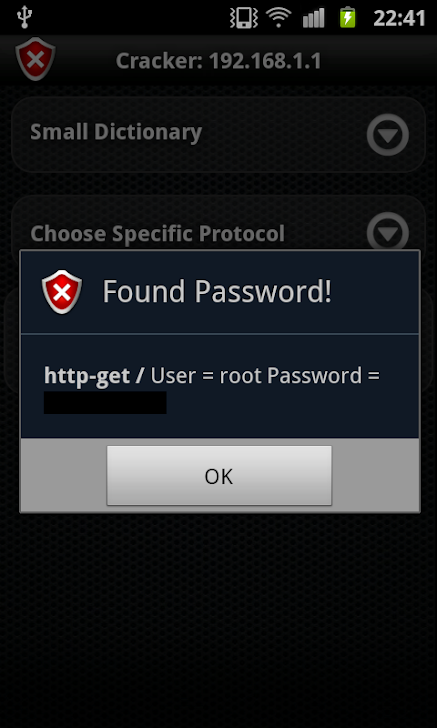 Once we are done testing, the most important ANTI function is the Report - Everything we have found in the network, vulnerable devices, opened ports, and extra information that will later assist when preparing the assessment report - all is summed up in text and emailed. ANTI3 supports multiple networks so now you can fully use it for your daily penetration tests. And everything is extremely user-friendly! Couldn't ask for more I guess: 5 Stars out of 5!
Download ANTI3 from zImperium website