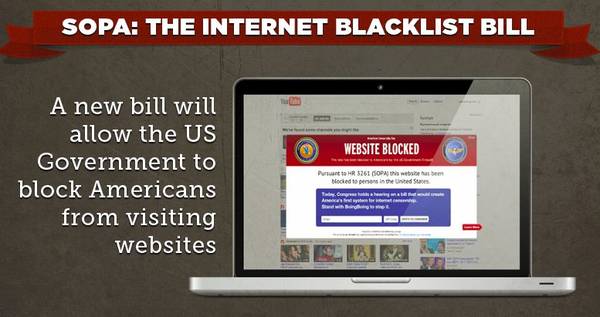 The Stop Online Piracy Act (SOPA) is the newest attempt by Congress and corporations in the United States to regulate the Internet. SOPA's proponents include the Motion Picture Association of America and the Recording Industry of America. They view SOPA as a means to counter rampant piracy on the Internet, especially sites such as ThePirateBay.org.
A little-noticed section of the Stop Online Piracy Act could make it illegal to distribute Tor and other software that can circumvent attempts by the U.S. government to block pirate Web sites.
The effects of SOPA and PIPA will be felt throughout the world, as the way the bill defines "U.S. websites" is so broad as to cover most of the Internet itself. The list of collateral damage the bills are feared to cause goes on, and the list of the bills' critics keeps expanding. In addition to the million+ citizens who have spoken out, the legislation is also opposed by tech companies such as Google, Yahoo!, Facebook, Twitter, Reddit, AOL, LinkedIn, eBay, Mozilla, Wikimedia, and, yes, even Microsoft.
The Internet is probably the most important technological advancement of my lifetime. Its strength lies in its open architecture and its ability to allow a framework where all voices can be heard. Like the printing press before it (which states also tried to regulate, for centuries), it democratizes information, and thus it democratizes power. If we allow Congress to pass these draconian laws, we'll be joining nations like China and Iran in filtering what we allow people to see, do, and say on the Web.
A simple way that many people don't know about and may never know about if President Obama eventually signs SOPA into law is that a "Darknet" can be used to conceal the location of your IP address. A "Darknet" is a network that runs by obscuring the normal detection of the internet and can only be accessed using special client software.
"I worry that it is vague enough, and the intention to prevent tunneling around court-ordered restrictions clear enough, that courts will bend over backwards to find a violation," says Mark Lemley, a professor at Stanford Law School who specializes in intellectual property law.
One example of a such a network is Tor. Tor economizes and encrypts your browsing activity. Tor allows your IP address to appear as that of a random node somewhere else on the network. Since that random node will usually be outside of the United States, a Tor user will not get routed away from sites that SOPA aims to prevent users from accessing. Under SOPA, however, software such as Tor or even sharing information about software like Tor could be deemed illegal.
Wendy Seltzer, a fellow at Yale Law School and former intellectual property litigator who is a member of the Tor Project's board of directors, says she's worried about how the Justice Department would wield this language. The Tor Project develops software to preserve online anonymity but which can also be used to bypass SOPA-created blockades.
Tor was created by the U.S. government (specifically, the U.S. Naval Research Laboratory). The subsequent organization formed to develop the software, the nonprofit Tor Project, is currently funded in part by multiple federal agencies that hope that it will let Internet users in China and other repressive regimes bypass their country's informational blockades.
Educate yourself. Call your congressperson or senator and make your voice heard. You can make a difference.