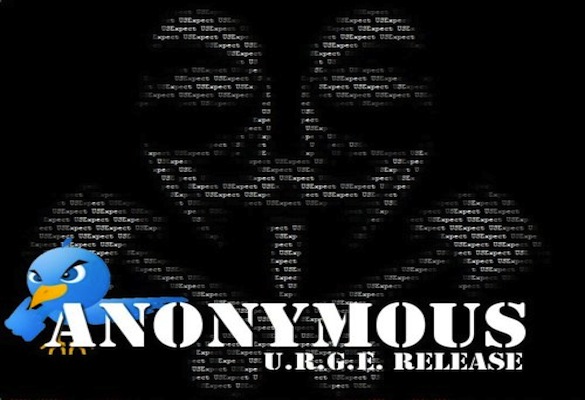 Anonymous have created something called Universal Rapid Gamma Emitter, or more simply URGE, which hijacks Twitter trending topics, allowing Anonymous members and supporters to subvert the topic with their own embedded messages. Anonymous is calling it TwitterRaiding.

Members of the group say that they are tired of constantly seeing trending topics that are redundant or related to pop culture and created this tool to help create more attention for topics that may have a wider meaning or different kind of impact on other Twitter users. In a statement, members say that, "This is not a hacking tool nor is it an exploit tool."
A press release on URGE states:
To the people of the interwebz,
We recently have become tired of seeing trending topics on twitter that were redundant and "pop culture" like. We have also grown tired of Twitter not trending hash tags that actually serve a cause and mean something to free thinkers of the world. We have taken note of why Twitter would not do so, they only trend topics which would "appeal" to people and can get people to tweet more. This was pathetic in our eyes, and we could not stand by and take it anymore. We have developed a program called "U.R.G.E. Universal Rapid Gamma Emitter (twitter edition)" which hijacks trending topics of our choice and and lets us tweet messages within them. This will help raise awareness of problems going on in this world and show people that real problems exist outside of "Jersey Shore" and "Sex". We will distribute this program amongst Anonymous and anyone else who cares to use this for awareness and bashing corrupt politicians. This is not a hacking tool nor is it an exploit tool, it was created to make it easier for us to tweet faster without copying and pasting constantly.

Anonymous is creating something useful for people to subvert pop culture trash for a social end. It's a nice addition to the world of culture jamming and should be seen as a model for all others looking to subvert the dominant culture and educate a generation suckled at the teat of and hypnotized by celebrity, gossip, haircuts, steroid-infused beefcakes and perpetual texting.

The URGE tool is being distributed among Anonymous members and for anyone else who wishes to use it. I'm not sure that I will use this tool myself since I'm not entirely comfortable with using software provided by Anonymous members, but it appears to be a fast way to hijack trending topics to tweet about issues you may find more important than pop culture discussions.
You can Download this program here (Windows-Beta)
You will need .net framework four to run this program.
U.R.G.E Users Manual