Rankmyhack got hacked by HaxOr

Rankmyhack.com got hacked by "HaxOr". Rankmyhack.com is a website, lets hackers submit and rate each others hacks in order to determine the world's best hacker. According to the New York Times, the site has picked up at least 700 members since it launched at the end of July. The bounty section of this site was created in an attempt to focus the abilities of talented hackers against political and government forces that need to be put back in line.

Hax0r hack and upload a text file on server as shown. Message written in page "Greetz to all members of Team INTRA...Secure your shit!". We (THN) check "Upload" folder on FTP of same site, which list all image files uploaded there. 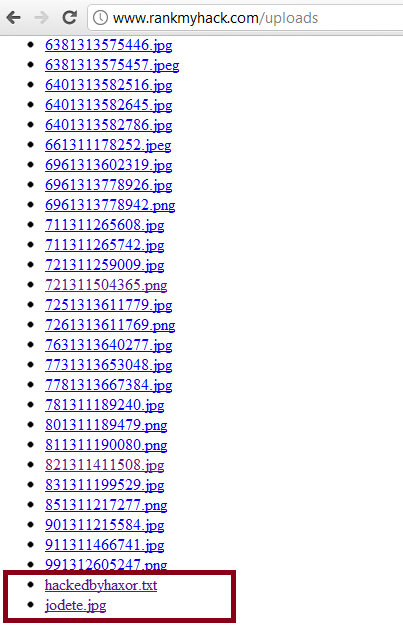 One of the Image file with name "jodete.jpg" is supposed to be PHP SHELL uploaded by Hacker for Hacking attempt.
UPDATE : Rankmyhack.com Server also got hacked by T H E N 4 7 7 : https://pastebin.com/bq8xJPMn