March 11, 2011Mohit Kumar
Anti-cuts campaigners from UK Uncut have hacked into the website of phone giant Vodafone (https://worldofdifference.vodafone.co.uk/) and posted blogs claiming the company has avoided millions of pounds in tax.
The group, set up to oppose government cuts and corporate tax avoidance, has staged hundreds of direct action protests against companies and banks since it was formed five months ago, many focusing on alleged tax avoidance. 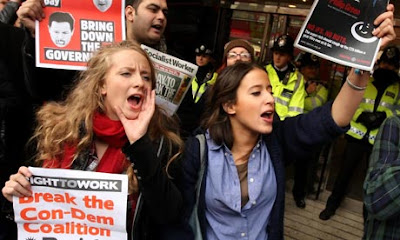 Activists took over the blogs on the World of Difference website, the company's corporate and social responsibility initiative, demanding the company "pays its tax". Twenty minutes after activists hacked that section of Vodafone's website, it appeared to have been taken down.
The World of Difference programme awards small grants to young people to undertake charity work and each winner has a blog on the website. UK Uncut were leaked the password details by a small group of the winners, who were angry at the firm's alleged tax avoidance practices.
One of the winners that leaked the passwords, who wished to remain anonymous, said: "Vodafone make a big deal out of their funding to charity, but their charitable giving pales into insignificance compared to the £6bn they got away without paying in tax.
"I work for a charity and understand how the government's brutal spending cuts will hit the poorest and most vulnerable. So many charities, including mine, are under threat. Vodafone's tax dodge alone could pay for every cut to every charity in the country."
Vodafone have denied that they avoided a £6bn tax liability.
Activists said dozens of messages would be posted on Vodafone's website, including photos and videos of UK Uncut's actions at Vodafone stores and details of some of the cuts that could be avoided if the government cracked down on tax avoidance.
UK Uncut's Fiona Samuels, 31, said: "These cuts are not necessary, not fair and there are alternatives. People across the country are angry and willing to fight to prevent unprecedented cuts to public services."
Vodafone responded to the hacking of the website, saying: "We've seen a couple of posts on World of Difference winners' blogs relating to allegations of tax avoidance. Given these are incorrect, they have been removed.
"World of Difference winners are doing great things for charities up and down the country. It's very sad to see how low people will go to further spread misinformation and for the charitable programme to be used as a platform for this kind of protest."