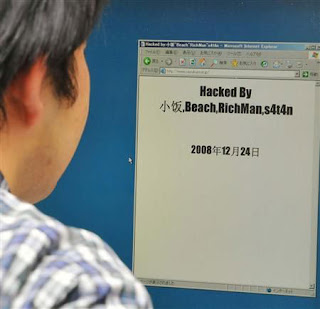 A total of 35,000 websites on the Chinese mainland were attacked by hackers in 2010, including 4,635 government websites, according to the Internet security report released by the National Computer Network Emergency Response Technical Team/Coordination Center of China (CNCERT/CC) on March 9.

The report shows that the IP addresses of 5 million domestic host computers were infected with a trojan horse or corpse virus.

According to the report, government websites are vulnerable to hacker attacks and websites of financial institutions have become the main targets of hackers. According to the monitoring by the CNCERT/CC, 35,000 websites on Chinese mainland were victims of hackers in 2010, a decrease of 22 percent from 2009. Of them, however, 4,635 were government websites, an increase of 68 percent from a year earlier. Around 60 percent of ministerial-level websites have potential security risks to various degrees.

"Hackers use two main means to attack government websites. One means is to turn the homepage of government websites into that of hacker organizations in order to show off their skills and the other is to hide hackers' own pages on government Web sites before telling potential buyers that the servers and bandwidth of the government Web sites have been under their control and can be leased and transferred to criminals," said Zhou Yonglin, head of the Operation Department under the CNCERT/CC.

Furthermore, there is an increasingly evident profit-seeking trend for network criminal behaviors. websites of large-scale e-commerce operators, financial institutions and third party online payment service providers have become the main targets of phishing. Hackers have made knockoff websites and tempted users to log in and trade in order to steal their accounts and passwords, leading to losses.