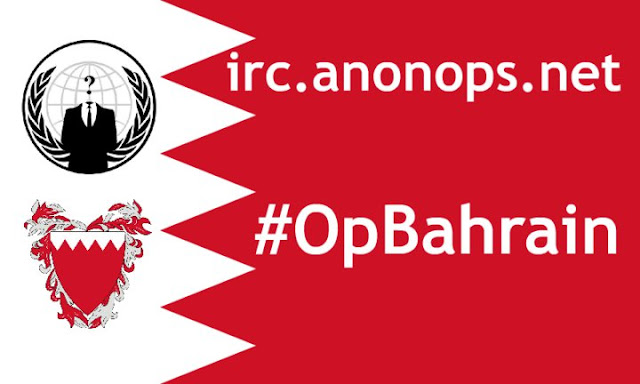 Dear Free-Thinking Citizens of THE WORLD,
The Bahrainian government has shown by its actions that it intends to brutally enforce its reign of injustice by limiting free speech and access to truthful information to its citizens and the rest of the world. It is time to call for an end to this oppressive regime. The most basic human right is the transparency of one's government, and Bahrain's is no exception.
By interfering with the freedom to hold peaceful protests, the Bahrainian government has made itself a clear enemy of its own citizens and of Anonymous. The actions of this regime will not be forgotten, nor will they be forgiven.
When people are faced with such injustices, Anonymous hears those cries, and we will assist in bringing to justice those who commit criminal acts against the innocent. We will not remain silent and let these crimes against humanity continue. The attempts to censor the Bahrainian people from the Internet - which prevents them from communicating their struggle to the outside world - are despicable stratagies and show the cowardness of this regime, as well as the measures they are willing to take to cover their crimes.
To the people of Bahrain: We stand with you against your oppressors. This is not only your struggle, but one of people who are struggling for freedom all over the world. With the recent success in Tunisia and Egypt, we believe your revolution will succeed. Your brave actions will maintain the momentum of revolution for citizens all around the world wishing to regain their own freedoms.
We are Anonymous.
We are legion.
We do not forgive.
We do not forget.
Expect us. 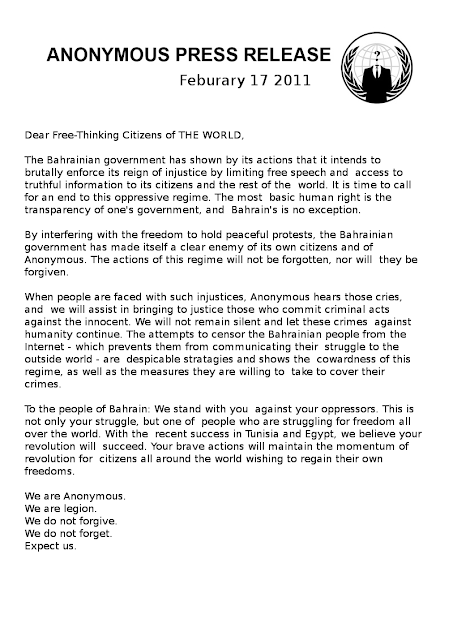