Dec 07, 2010Mohit Kumar
WikiLeaks' main website could not be accessed on Friday through its WikiLeaks.org domain name after a subsidiary of Dynamic Network Services terminated its domain name service. 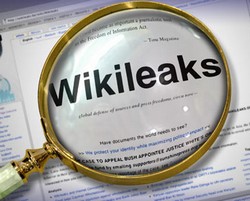 Dynamic Network Services' subsidiary, EveryDNS.net, terminated the WikiLeaks.org domain name because repeated DDOS (Distributed Denial of Service) attacks against WikiLeaks "have, and future attacks would, threaten the stability of the EveryDNS.net infrastructure, which enables access to almost 500,000 other websites," it said on its website.

EveryDNS.net said it notified WikiLeaks by email, Twitter and the chat function available through the WikiLeaks.org website that its domain name service would be terminated in 24-hours. That 24-hour period ended Dec. 2 at 10 p.m. Eastern Standard Time in the U.S.
"Any downtime of the Wikileaks.org website has resulted from its failure to use another hosted DNS service provider," EveryDNS.net said.
WikiLeaks put out a note on Twitter saying, "WikiLeaks,org domain killed by U.S. EveryDNS.net after claimed mass attacks," and implored supporters to keep WikiLeaks strong with continued donations.
The WikiLeaks comment appeared at odds with an earlier WikiLeaks Twitter post saying that DDOS attacks against its servers reached 10 Gigabits per second on Nov. 30. Amazon Web Services also confirmed the DDOS attacks, saying in a blog posting that, "There were indeed large-scale DDOS attacks, but they were successfully defended against."
The domain name service termination comes just days after Amazon Web Services stopped hosting WikiLeaks on its servers for breaking user rules saying that websites must use their own content and not carry data that might injure others. The U.S. Homeland Security and Governmental Affairs Committee, chaired by Senator Joe Lieberman, had also asked Amazon to stop hosting the controversial website.
WikiLeaks has come under fire for publishing classified U.S. documents, including videos and documents from the wars in Iraq and Afghanistan as well as sensitive cables sent between U.S. embassies and the U.S. State Department. WikiLeaks continues to post the cables.
Dynamic Network Services is a U.S. company based in Manchester, New Hampshire. Its EveryDNS.net subsidiary said all of its systems were functioning normally.