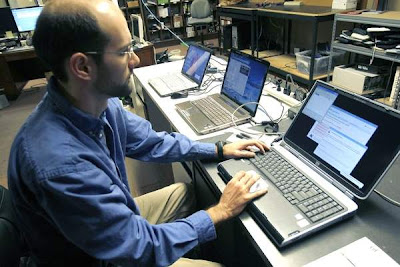 The past year reached a new record high for bogus e-mails that clog people's inboxes and can release damaging and costly viruses on computers.
Nearly 90 percent of sent e-mail is a ruse to rip off unsuspecting Internet users, according to data released by the computer security firm Symantec.
The firm projects 95 billion e-mails will be sent in 2010, an average of 400 per Internet user, according to data culled from Symantec and Internet World Stats, a marketing research firm.
The number of phishing e-mails, those that hunt out passwords that can steal sensitive and financial information, increased 1.4 percent compared with 2009, according to Symantec.
The news is especially troubling since e-commerce sales reached $200 billion in 2007, the latest data available from the U.S. Census Bureau.
"The fact is that these spammers are getting better and better on exploiting people," said Jim Fisher, owner of Excel Computer Services in Florence. "They keep ratcheting up their capabilities."
Fisher has first-hand experience. After a visit to eBay, he received an e-mail message that his account had been hacked. The e-mail led him to what looked like an eBay website that asked for his user name and password.
Fisher looked at the web address and realized he wasn't visiting eBay.
"As soon as I entered (information), I had that 'Oh, crap' feeling," Fisher said.
He immediately visited the real eBay site and changed his password.
"I consider myself pretty good at this stuff and I got spammed," he said.
How can computer users avoid malicious e-mails that, pixel for pixel, look legitimate?
"Don't get on the Internet," quipped Samuel Rickard, owner of Advanced Micro Services in Sheffield.
If you need to be connected, however, Rickard suggests making sure your operating system is up to date, be careful of the websites you visit and install anti-virus programs along with those such as Malwarebytes or Spybot Search and Destroy.
Originally, spyware programs watched what you bought on the Internet, Rickard said. Then these programs turned into malware, programs that attack your computer.
Now, the latest trend is ransomware, programs that request payment to get rid of a supposed virus on your computer. Without payment, your computer won't work properly, or so these programs claim.
"They want your credit card number. You're not infected with a true virus, you're infected with an annoyance," Rickard said.
Months after clearing a ransomware program, one customer had $2,700 charged to his credit card for a bogus charge of weapons sold in Yemen, Rickard said. The customer later got the charges reversed.
The virus war is getting even more extreme with rootkits and bootkits that infect computers and don't allow installation of anti-virus programs or stop computers from being able to boot up.
Fisher likens the Internet to driving on a highway — a couple of scares make most people aware of the dangers, but accidents still happen.
"It's going to take people getting taken once or twice before getting it," he said.
News Submitted By : Om Rathore