September 07, 2018Swati Khandelwal
A highly popular top-tier app in Apple's Mac App Store that's designed to protect its users from adware and malware threats has been, ironically, found surreptitiously stealing their browsing history without their consent, and sending it to a server in China. What's more concerning? Even after Apple was warned a month ago, the company did not take any action against the app. The app in question is "Adware Doctor," the Mac App Store No. 1 paid utility and also ranked as the fourth most popular paid app on the store, which sells for $4.99 and markets itself to be the "best app" to prevent "malware and malicious files from infecting your Mac." However, a security researcher with the @privacyis1st Twitter handle detected Adware Doctor's suspicious spyware-like behavior almost a month ago and also uploaded a proof-of-concept video demonstration of how the user's browser history is exfiltrated. The researcher informed Apple about 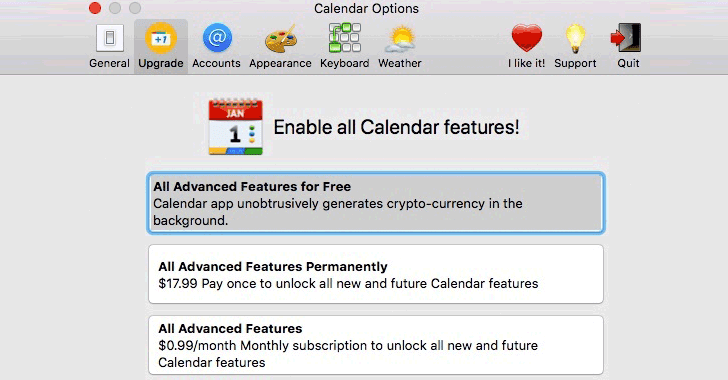 March 13, 2018Mohit Kumar
Nothing comes for free, especially online. Would you be okay with allowing a few paid services to mine cryptocurrencies using your system instead of paying the subscription fee? Most free websites and services often rely on advertising revenue to survive, but now there is a new way to make money—using customers' computer to generate virtual currencies. It was found that a scheduling app, dubbed Calendar 2, was embracing cryptocurrency mining in exchange for free access to its app premium features, but the developer has to take it down from the Apple App Store following reports that it's not working as intended. Cryptocurrency mining is not a new concept, but the technology has recently exploded after hackers found it a great way to make millions of dollars by hijacking computers to secretly perform cryptocurrency mining in the background without users' knowledge or consent. Due to this cryptocurrency mining has emerged as one of the biggest threats in recent mon
Next Page 