Mar 16, 2016
The Giant search engine Google has lost an anti-monopoly appeal in Russia against ruling related to its Android mobile OS The Moscow Arbitration Court on Monday ruled that Google had violated its dominant position with the help of its free open source mobile platform " Android " by forcing its own apps and services like Youtube, Google Map, and others, on users — reducing competition. The complaint was brought against Google last February by competing search engine Yandex — Russian Counterpart of Google — which had argued that Google broke competition rules by requiring handset manufacturers to pre-install its apps on Android phones and tablets. Yandex-1, Google-0 According to the survey conducted by Liveinternet data in September 2013, Yandex accounted 57.4% of the Russian search market, while Google shared 34.9%. This stats reflected in the share market, as their shares were 62.2 and 26 percent respectively. These statistical analyzes really worried 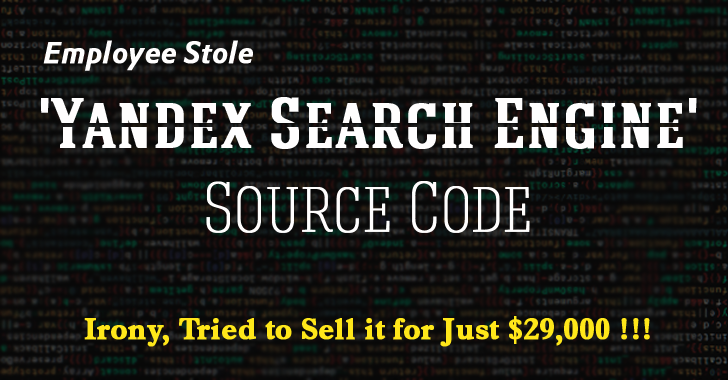 Dec 29, 2016
A former employee of Russian search engine Yandex allegedly stole the source code and key algorithms for its search engine site and then attempted to sell them on the black market to fund his own startup. Russian publication Kommersant reports that Dmitry Korobov downloaded a type of software nicknamed " Arcadia " from Yandex's servers, which contained highly critical information, including the source code and some of the "key algorithms," of its search engine. Korobov then tried to sell the stolen codes to an electronics retailer called NIX, where a friend of his allegedly worked, and on the dark underground market in search of potential buyers. But What's the Punchline? The funniest part is that Korobov requested only $25,000 and 250,000 rubles (a total of almost $29,000) for Yandex's source code and algorithms, which actually cost "Billions of Rubles," or somewhere near $15 Million USD . However, Korobov was arrest
Next Page 