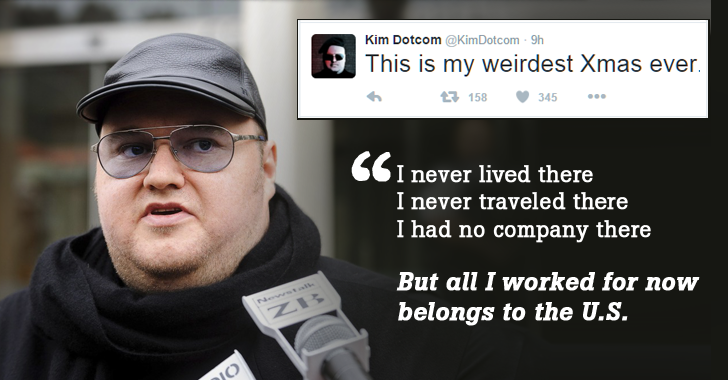 Dec 23, 2015
Internet millionaire and Megaupload founder Kim Dotcom and his three associates are eligible for extradition to the US to face criminal charges over massive copyright infringement on Megaupload (now-shuttered), the court has ruled citing " overwhelming " evidence. On Tuesday afternoon, New Zealand District Court Judge Nevin Dawson told the court that the United States had presented enough evidence against Dotcom and his co-defendants and that they should be surrendered to the US. US prosecutors want Dotcom, and colleagues Mathias Ortmann , Bram van der Kolk and Finn Batato to stand trial on charges of copyright infringement, racketeering, and money laundering. "No matter what happens in Court tomorrow, I'll be fine. Don't worry. Enjoy your Christmas & know that I'm grateful to have you, my friends," Dotcom  tweeted before the court hearing. The court ruling comes almost three years after the New Zealand police raided Dotcom's 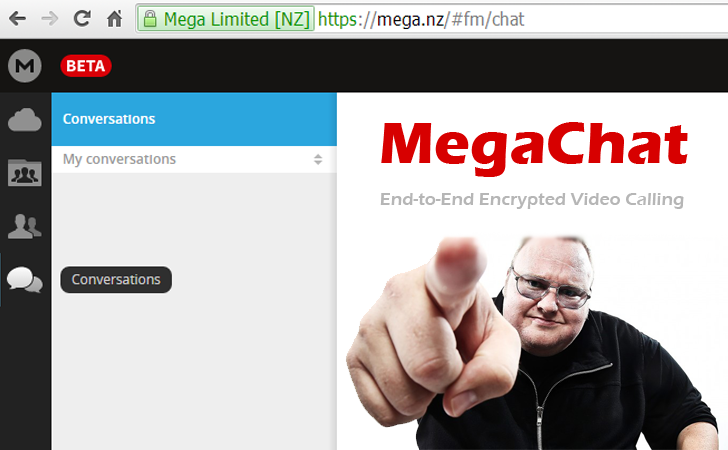 Jan 22, 2015
Are you worried about your privacy? Its Obvious because of a Hacker or the government could be snooping in your emails, voice or video calls. The Famous Internet entrepreneur Kim Dotcom , who introduced legendary Megaupload and Mega file sharing services to the World, has now released its latest encrypted communication software for video calling, messaging and chat. Kim Doctom's file-sharing site Mega has launched the public beta of its end-to-end encrypted video and audio chat service called " MegaChat ", which the company says gives better protection than alternatives such as Skype and Google Hangouts. MegaChat is currently free to use and right now just provides browser-based audio and video calls, but Mr. Dotcom said on Twitter "Text chat and video conferencing will follow soon," HOW TO USE MEGACHAT Create a Mega account. Simply log in via the web browser and click on the Conversations icon provided on the left-hand side  Contacts will need their own M

Jun 20, 2013
Kim Dotcom today said on Twitter that Megaupload user data in Europe has been irreversibly lost because it was deleted by a Dutch hosting company called LeaseWeb.  LeaseWeb is based in Germany and has subsidiaries also in the United States, the company.  LeaseWeb has 60,000 servers under its management and more than 15,000 clients worldwide. " The greatest massacre data of history ", The news is shocking if we consider the wealth of information contained in the files.  Leaseweb has informed Kim Dotcom that all 630 servers they rented have been wiped clean. This means that petabytes of data belonging to Megaupload users is now gone without any notice. LeaseWeb responds to Kim Dotcom " When Megaupload was taken offline, 60 servers owned by MegaUpload were directly confiscated by the FIOD and transported to the US. Next to that, MegaUpload still had 630 rented dedicated servers with LeaseWeb. For clarity, these servers were not owned by MegaUpload, t 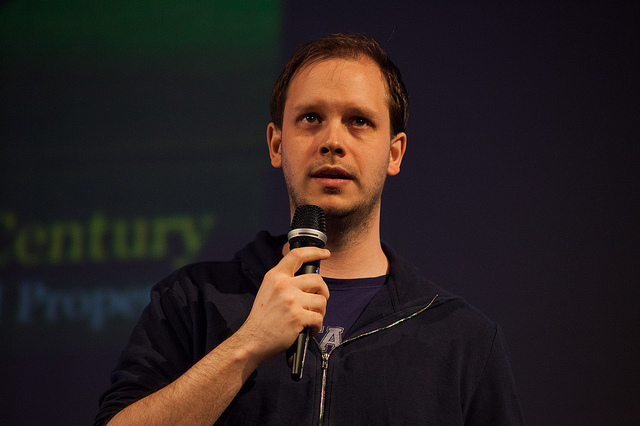 May 17, 2013
Peter Sunde ,   the former spokesman for The Pirate Bay has announced he will run in the European Parliament elections next year. Sunde, will participate for the Finnish branch of the Pirate Party. The Pirate Party was founded in Sweden in 2006, and in 2009 Christian Engström was the first member of the Pirate Party elected to European Parliament. Sunde, along with partners Carl Lundström, Frederik Neij , and Gottfrid Svartholm Warg , were convicted of accessory to breaching copyright laws by a Swedish court in 2009. Peter Sunde, who was born in Sweden but holds Finnish citizenship, is facing a prison sentence for his involvement with BitTorrent doesn't seem to concern him very much. He has been fighting the sentence for a while and if he gets elected things might get very interesting indeed. Sunde describes himself as ' socialist, green and a pirate ' on his blog. " I am doing what I can to help solve the problems we have today, as well as the ones we

Feb 11, 2013
One week after launching a Bug bounty program by the Kim Dotcom 's new file-storage and sharing service MEGA claims to have fixed seven vulnerabilities. Although Mega hasn't shared how much money and to whom it paid out in the first week. But as promised, it is clear that MEGA paid out thousands of dollars in bug bounties during the first week of its security program. We found bug hunter yesterday (tweeted)- Mr.  Frans Rosén received 1000 Euros in the bug fixing challenge. This tweet was also Re-tweeted by Kim Dotcom later, that confirmed Frans's class III bugs reward. Congratulations @ fransrosen for XSS in #MEGA . Handsome EUR 1000 in Bug Bounty Program twitter.com/fransrosen/sta… — The Hacker News™ (@TheHackersNews) February 10, 2013 In a blog post, Mega explained how it classifies vulnerabilities and their impacts. Vulnerabilities were classified into VI classes, with I being the lowest risk and VI being the highest. Seven qualified bug details are as shown b

Feb 01, 2013
Kim Dotcom is offering a bounty of €10,000 (approx. US$13,580) to the first person who breaks its newly launched file storage service. Mega's launch last month was meet by criticism from multiple security researchers, Kim Dotcom announced a prize to the hackers last week. Kim tweeted," #Mega's open source encryption remains unbroken! We'll offer 10,000 EURO to anyone who can break it. Expect a blog post today ." Dotcom believes the improvements made to his service's security have made the site close to unbreakable, and Mega staff remain bullish about the site's privacy qualities. Less than two weeks old, Mega passed 1 million registered users after just one day online, and is storing nearly 50 million files. Mega continues to face claims of illegal filesharing on the site. Dotcom claimed this week that only 0.001 percent of files on Mega have been removed for potential copyright infringement. The company blocked a third-party search engine from accessing publi 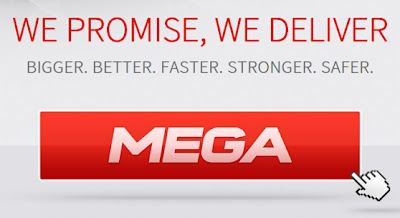 Nov 07, 2012
Kim Dotcom is still fighting a legal battle in New Zealand against the United States over alleged copyright infringement and piracy. Kim Dotcom's upcoming Mega website Me.ga has had its domain name seized by the African nation of Gabon, with a government minister saying his country will not be used as a base for copyright infringement. Last week, Dotcom unveiled plans to relaunch his file-sharing site in January 2013, using the Gabonese domain me.ga, with the message " this button will change the world ." "Gabon cannot serve as a platform or screen for committing acts aimed at violating copyrights, nor be used by unscrupulous people," says the country's Communication Minister Blaise Louembe. Dotcom reassured his followers, by tweeting , " Don't worry. We have an alternative domain. This just demonstrates the bad faith witch hunt the US government is on...Gabon Minister used time machine to analyze legality of the future Mega. Verdict: Cyber cri
Next Page 