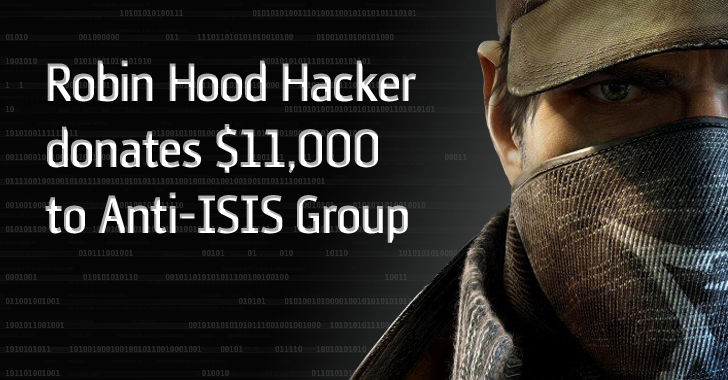 May 19, 2016
Meet this Robin Hood Hacker: Phineas Fisher, who breached Hacking Team last year, revealed on Reddit Wednesday that he hacked a bank and donated the money to Kurdish anti-capitalists in Rojava autonomous region in northern Syria that borders territory held by the ISIS ( Islamic State militant group ). Fisher, also known as "Hack Back" and "@GammaGroupPR," claimed responsibility for both the Hacking Team and Gamma Group data breaches. The vigilant hacker donated 25 Bitcoin (worth around US$11,000) to a crowdfunding campaign known as the Rojan Plan, which has been set up by members of the Rojava's economic committee, described by Fisher as "one of the most inspiring revolutionary projects in the world." Also Read:  Here's How Hackers Stole $80 Million from Bangladesh Bank The funds donated to the campaign came from a bank heist, though the hacker neither revealed the name of the bank nor provided any further details of the bank heist. Whe

Nov 16, 2015
The world watched in horror as coordinate attacks in Paris Friday night killed more than 130 people and  left over 352 injured. Over 20 attackers have so far been part of the terrorist cell that planned the deadly Paris attacks, with seven suicide bombers dead, seven attackers under arrest and a total of six people on the run. Also Read:  NO, We Can't Blame Edward Snowden and Encryption for Terror Attacks . The attacks were carried out by Islamic State (ISIS) , who later claimed responsibility for targeting innocent people at 'soft' locations that lack police or military protection, including Bataclan concert venue where at least 89 people lost their lives. Following the bloody terror attacks, the hacktivist collective Anonymous declared war on the Islamic State ( IS, formerly ISIS/ISIL ) saying, " We will launch the biggest operation ever against you. " But the Question here is: From Where did the terrorist cell that planned the brutal terrorist attacks i
Next Page 