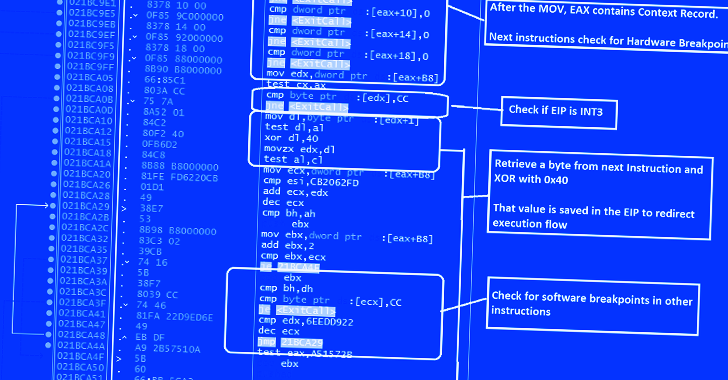 GuLoader, also called CloudEyE, is a Visual Basic Script (VBS) downloader that's used to distribute remote access trojans such as Remcos on infected machines. It was first detected in the wild in 2019.

In November 2021, a JavaScript malware strain dubbed RATDispenser emerged as a conduit for dropping GuLoader by means of a Base64-encoded VBScript dropper.

Recent GuLoader samples unearthed by CrowdStrike have been found to exhibit a three-stage process wherein the VBScript is designed to deliver a next-stage that performs anti-analysis checks before injecting shellcode embedded within the VBScript into memory.

The shellcode, besides incorporating the same anti-analysis methods, downloads a final payload of the attacker's choice from a remote server and executes it on the compromised host.

"The shellcode employs several anti-analysis and anti-debugging tricks at every step of execution, throwing an error message if the shellcode detects any known analysis of debugging mechanisms," the researchers pointed out.

This includes anti-debugging and anti-disassembling checks to detect the presence of remote debuggers and breakpoints, and if found, terminate the shellcode. The shellcode also features scans for virtualization software.

An added capability is what the cybersecurity company calls a "redundant code injection mechanism" to avoid NTDLL.dll hooks implemented by endpoint detection and response (EDR) solutions.

NTDLL.dll API hooking is a technique used by anti-malware engines to detect and flag suspicious processes on Windows by monitoring the APIs that are known to be abused by threat actors.

In a nutshell, the method involves using assembly instructions to invoke the necessary windows API function to allocate memory (i.e., NtAllocateVirtualMemory) and inject arbitrary shellcode into that location via process hollowing.

The findings from CrowdStrike also come as cybersecurity firm Cymulate demonstrated an EDR bypass technique known as Blindside that allows for running arbitrary code by using hardware breakpoints to create a "process with only the NTDLL in a stand-alone, unhooked state."