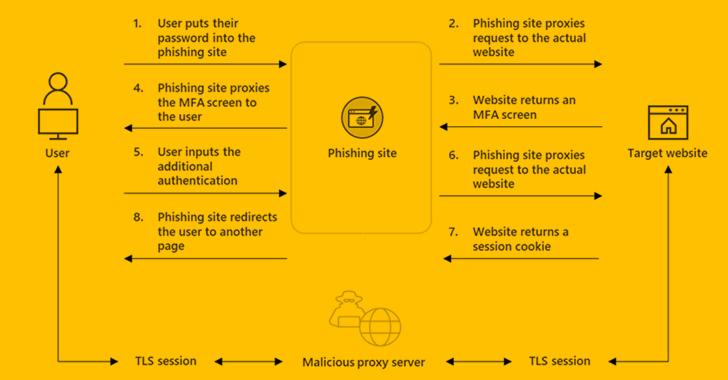 A new phishing-as-a-service (PhaaS) toolkit dubbed EvilProxy is being advertised on the criminal underground as a means for threat actors to bypass two-factor authentication (2FA) protections employed against online services.

EvilProxy is similar to adversary-in-the-middle (AiTM) attacks in that users interact with a malicious proxy server that acts as a go-between for the target website, covertly harvesting the credentials and 2FA passcodes entered in the login pages.

It's offered on a subscription basis per service for a time period of 10, 20, or 31 days, with the kit available for $400 a month and accessed over the TOR anonymity network after the payment is arranged manually with an operator on Telegram. Attacks against Google accounts, in contrast, cost up to $600 per month.

"After activation, the operator will be asked to provide SSH credentials to further deploy a Docker container and a set of scripts," Resecurity said, adding the technique mirrors that of another PhaaS service called Frappo that came to light earlier this year.

While the sale of EvilProxy to prospective customers is subject to vetting by the actors, it goes without saying that the service offers a "cost-effective and scalable solution" to carry out social engineering attacks.

The development is further an indication that adversaries are upgrading their attack arsenal to orchestrate sophisticated phishing campaigns targeting users in a manner that can defeat existing security safeguards.

To add to the concerns, the targeting of public-facing code and package repositories such as GitHub, NPM, PyPI, and RubyGems suggests that the operators are also aiming to facilitate supply chain attacks via such operations.

Gaining unauthorized access to accounts and injecting malicious code into widely used projects by trusted developers can be a goldmine for threat actors, significantly widening the impact of the campaigns.

"It's highly likely the actors aim to target software developers and IT engineers to gain access to their repositories with the end goal to hack 'downstream' targets," the researchers said.