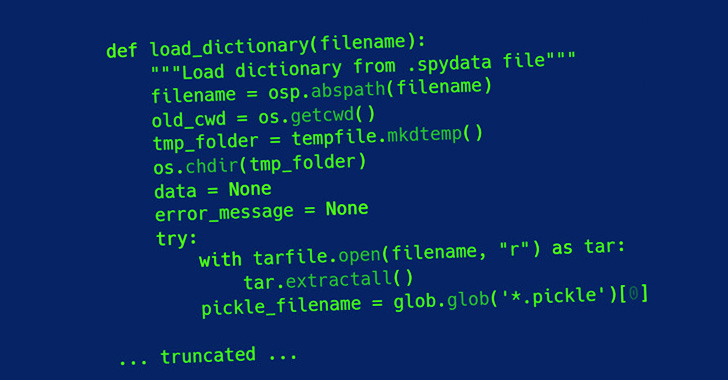 As many as 350,000 open source projects are believed to be potentially vulnerable to exploitation as a result of a security flaw in a Python module that has remained unpatched for 15 years.

The shortcoming, tracked as CVE-2007-4559 (CVSS score: 6.8), is rooted in the tarfile module, successful exploitation of which could lead to code execution from an arbitrary file write.

"The vulnerability is a path traversal attack in the extract and extractall functions in the tarfile module that allow an attacker to overwrite arbitrary files by adding the '..' sequence to filenames in a TAR archive," Trellix security researcher Kasimir Schulz said in a writeup.

Originally disclosed in August 2007, the bug has to do with how a specially crafted tar archive can be leveraged to overwrite arbitrary files on a target machine simply upon opening the file.

Put simply, a threat actor can exploit the weakness by uploading a malicious tarfile in a manner that makes it possible to escape the directory that a file is intended to be extracted to and achieve code execution, allowing the adversary to potentially seize control of a target device.

"Never extract archives from untrusted sources without prior inspection," the Python documentation for tarfile reads. "It is possible that files are created outside of path, e.g. members that have absolute filenames starting with '/' or filenames with two dots '..'."

The vulnerability is also reminiscent of a recently disclosed security flaw in RARlab's UnRAR utility (CVE-2022-30333) that could lead to remote code execution.

Trellix has further released a custom utility called Creosote to scan for projects vulnerable to CVE-2007-4559, using it to uncover the vulnerability in the Spyder Python IDE as well as Polemarch.