Microsoft Warns of Large-Scale AiTM Phishing Attacks Against Over 10,000 Organizations 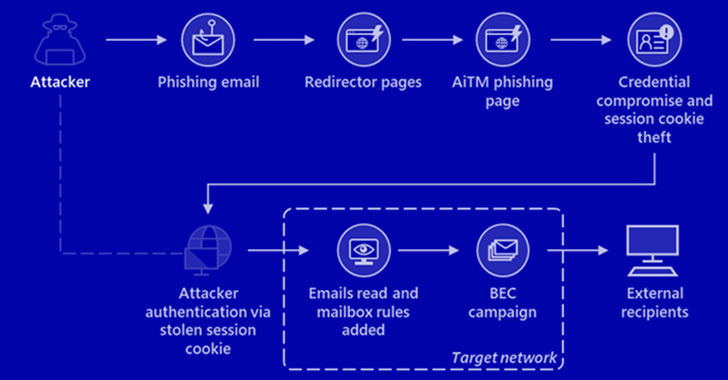 Microsoft on Tuesday disclosed that a large-scale phishing campaign targeted over 10,000 organizations since September 2021 by hijacking Office 365's authentication process even on accounts secured with multi-factor authentication (MFA).

The intrusions entailed setting up adversary-in-the-middle (AitM) phishing sites, wherein the attacker deploys a proxy server between a potential victim and the targeted website so that recipients of a phishing email are redirected to lookalike landing pages designed to capture credentials and MFA information.

"The phishing page has two different Transport Layer Security (TLS) sessions — one with the target and another with the actual website the target wants to access," the company explained.

"These sessions mean that the phishing page practically functions as an AitM agent, intercepting the whole authentication process and extracting valuable data from the HTTP requests such as passwords and, more importantly, session cookies."

Once in possession of this information, the attackers injected the cookies into their own browsers to circumvent the authentication process, regardless of whether the victim had enabled MFA protections.

"The session cookie is proof for the web server that the user has been authenticated and has an ongoing session on the website," Microsoft explained. "In AitM phishing, an attacker attempts to obtain a target user's session cookie so they can skip the whole authentication process and act on the latter’s behalf."

The phishing campaign spotted by Microsoft was orchestrated to single out Office 365 users by spoofing the Office online authentication page, with the actors using the Evilginx2 phishing kit for carrying out the AitM attacks. 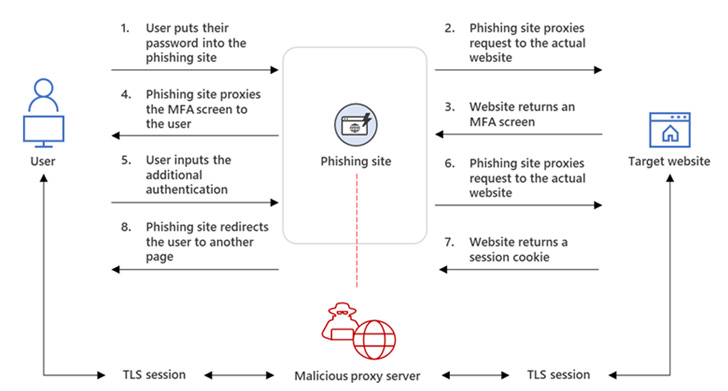 This involved sending email messages containing voice message-themed lures that were marked with high importance, tricking the recipients into opening malware-laced HTML attachments that redirected to the credential-stealing landing pages.

To complete the ruse, the users were eventually routed to the legitimate office[.]com website post-authentication, but not before the attackers leveraged the aforementioned AitM approach to siphon the session cookies and obtain control over the compromised account.

The attacks didn't end there, for the threat actors abused their mailbox access to perform payment fraud by using a technique called email thread hijacking to dupe parties on the other end of the conversation to illicitly wire funds to accounts under their control.

To further mask their communications with the fraud target, the threat actors also created mailbox rules that automatically moved every incoming email containing the relevant domain name to the "Archive" folder and marked it as "read."

"It took as little time as five minutes after credential and session theft for an attacker to launch their follow-on payment fraud," Microsoft noted.

The attackers are said to have employed Outlook Web Access (OWA) on a Chrome browser to conduct the fraudulent activities, while also deleting from the account's Inbox folder the original phishing email as well as the follow-on communications with the target from both the Archive and Sent Items folders to erase traces.

"This AiTM phishing campaign is another example of how threats continue to evolve in response to the security measures and policies organizations put in place to defend themselves against potential attacks," the researchers said.

"While AiTM phishing attempts to circumvent MFA, it's important to underscore that MFA implementation remains an essential pillar in identity security. MFA is still very effective at stopping a wide variety of threats; its effectiveness is why AiTM phishing emerged in the first place."

The findings come as a group of researchers from Stony Brook University and Palo Alto Networks demonstrated late last year a new fingerprinting technique that makes it possible to identify AitM phishing kits in the wild using a tool called PHOCA.

"Attacks like this are becoming more common as organizations and individuals enable multi-factor authentication (MFA) on accounts in order to better secure them," Erich Kron, security awareness advocate at KnowBe4, said in a statement.

"To protect against the phishing emails that trick the victims into clicking on a link, organizations should train employees how to identify and report phishing and should test them regularly with simulated phishing attacks that allow them to practice these skills. In addition, educating users on how to identify fake login pages will greatly reduce the risk of giving up the credentials and session cookies."