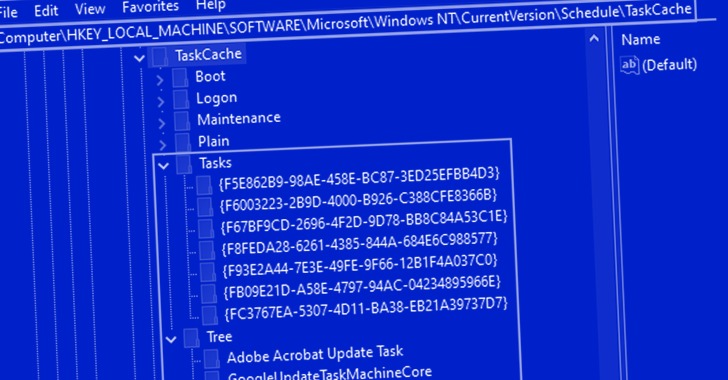 The Chinese-backed Hafnium hacking group has been linked to a piece of a new malware that's used to maintain persistence on compromised Windows environments.

The threat actor is said to have targeted entities in the telecommunication, internet service provider and data services sectors from August 2021 to February 2022, expanding from the initial victimology patterns observed during its attacks exploiting the then zero-day flaws in Microsoft Exchange Servers in March 2021.

Microsoft Threat Intelligence Center (MSTIC), which dubbed the defense evasion malware "Tarrask," characterized it as a tool that creates "hidden" scheduled tasks on the system. "Scheduled task abuse is a very common method of persistence and defense evasion — and an enticing one, at that," the researchers said.

Hafnium, while most notable for Exchange Server attacks, has since leveraged unpatched zero-day vulnerabilities as initial vectors to drop web shells and other malware, including Tarrask, which creates new registry keys within two paths Tree and Tasks upon the creation of the scheduled tasks -

"In this scenario, the threat actor created a scheduled task named 'WinUpdate' via HackTool:Win64/Tarrask in order to re-establish any dropped connections to their command-and-control (C&C) infrastructure," the researchers said.

"This resulted in the creation of the registry keys and values described in the earlier section, however, the threat actor deleted the [Security Descriptor] value within the Tree registry path." A security descriptor (aka SD) defines access controls for running the scheduled task.

But by erasing the SD value from the aforementioned Tree registry path, it effectively leads to the task "disappearing" from the Windows Task Scheduler or the schtasks command-line utility, unless manually examined by navigating to the paths in the Registry Editor.

"The attacks [...] signify how the threat actor Hafnium displays a unique understanding of the Windows subsystem and uses this expertise to mask activities on targeted endpoints to maintain persistence on affected systems and hide in plain sight," the researchers said.

The disclosure marks the second time in as many weeks that a scheduled task-based persistence mechanism has come to light. Recently, Malwarebytes detailed a "simple but efficient" method adopted by a malware called Colibri that involved co-opting scheduled tasks to survive machine reboots and execute malicious payloads.