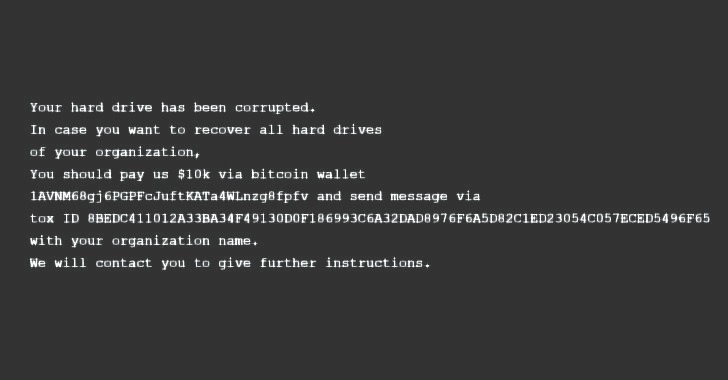 Cybersecurity teams from Microsoft on Saturday disclosed they identified evidence of a new destructive malware operation dubbed "WhisperGate" targeting government, non-profit, and information technology entities in Ukraine amid brewing geopolitical tensions between the country and Russia.

"The malware is disguised as ransomware but, if activated by the attacker, would render the infected computer system inoperable," Tom Burt, corporate vice president of customer security and trust at Microsoft, said, adding the intrusions were aimed at government agencies that provide critical executive branch or emergency response functions.

Also among those affected by the malware is an IT firm that "manages websites for public and private sector clients, including government agencies whose websites were recently defaced," Burt noted.

The computing giant, which first detected the malware on January 13, attributed the attacks to an emerging threat cluster codenamed "DEV-0586," with no observed overlaps in tactics and procedures to other previously documented groups. It further said the malware was found on dozens of impacted systems, a number it expects to increase as the investigation continues.

According to Microsoft Threat Intelligence Center (MSTIC) and Microsoft Digital Security Unit (DSU), the attack chain is a two-stage process that entails —

The malicious activity is "inconsistent" with cybercriminal ransomware activity for reasons that "explicit payment amounts and cryptocurrency wallet addresses are rarely specified in modern criminal ransom notes" and "the ransom note in this case does not include a custom ID," Microsoft said.

The development comes as numerous government websites in the Eastern European country were defaced on Friday with a message warning Ukrainians that their personal data was being uploaded to the Internet. The Security Service of Ukraine (SSU) said it found "signs" of involvement of hacking groups associated with the Russian intelligence services.

"Given the scale of the observed intrusions, MSTIC is not able to assess intent of the identified destructive actions but does believe these actions represent an elevated risk to any government agency, non-profit or enterprise located or with systems in Ukraine," the researchers cautioned.

However, Reuters earlier today raised the possibility that the attacks may have been the work of an espionage group linked to Belarusian intelligence that's tracked as UNC1151 and Ghostwriter. "Multiple significant intrusions into Ukrainian government entities have been conducted by UNC1151," cybersecurity firm Mandiant disclosed in a report in November 2021, pointing out the group's operations as those aligned with Belarusian government interests.