A previously unknown rootkit has been found setting its sights on Hewlett-Packard Enterprise's Integrated Lights-Out (iLO) server management technology to carry out in-the-wild attacks that tamper with the firmware modules and completely wipe data off the infected systems.

The discovery, which is the first instance of real-world malware in iLO firmware, was documented by Iranian cybersecurity firm Amnpardaz this week.

"There are numerous aspects of iLO that make it an ideal utopia for malware and APT groups: Extremely high privileges (above any level of access in the operating system), very low-level access to the hardware, being totally out of the sight of the admins, and security tools, the general lack of knowledge and tools for inspecting iLO and/or protecting it, the persistence it provides for the malware to remain even after changing the operating system, and in particular being always running and never shutting down," the researchers said.

Besides managing the servers, the fact that iLO modules have broad access to all the firmware, hardware, software, and operating system (OS) installed on the servers make them an ideal candidate to breach organizations using HP servers, while also enabling the malware to maintain persistence after reboots and survive OS reinstallations. However, the exact modus operandi used to infiltrate the network infrastructure and deploy the wiper remains unknown as yet.

Dubbed iLOBleed, the rootkit has been put to use in attacks since 2020 with the goal of manipulating a number of original firmware modules in order to stealthily obstruct updates to the firmware. Specifically, the modifications made to the firmware routine simulates the firmware upgrade process — by purportedly displaying the right firmware version and adding relevant logs — when in reality no updates are performed.

"This alone shows that the purpose of this malware is to be a rootkit with maximum stealth and to hide from all security inspections," the researchers said. "A malware that, by hiding in one of the most powerful processing resources (which is always on), is able to execute any commands received from an attacker, without ever being detected." 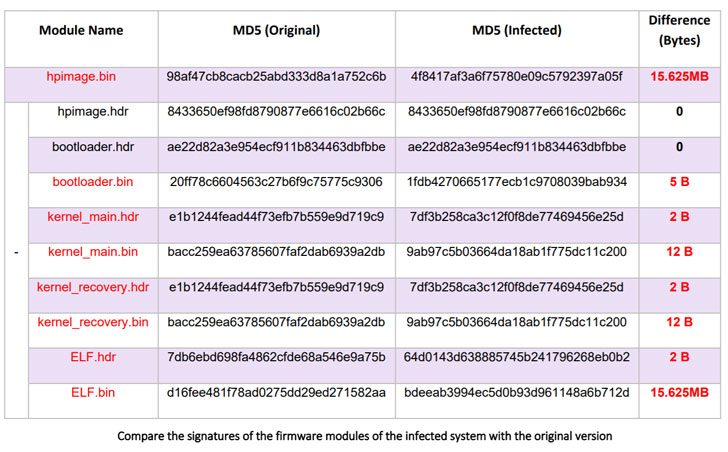 Although the adversary remains unidentified, Amnpardaz described the rootkit as likely the work of an advanced persistent threat (APT), a designation a nation-state or state-sponsored group that employs continuous, clandestine, and sophisticated hacking techniques to gain unauthorized access to a system and remain inside for a prolonged period of time without attracting attention.

HPE, in a statement shared with The Hacker News said that the vulnerability being exploited is not new and that it was disclosed and patched by the company in 2017. Given that versions iLO 4 and prior are at more risk of being modified and infected by the malware, the enterprise IT firm pointed out that customers who followed the recommended corrective actions or have upgraded to iLO 5 are not susceptible to exploitation.

If anything, the development once again brings firmware security into sharp focus, necessitating that firmware updates shipped by the manufacturer are promptly applied to mitigate potential risks, iLO networks are segmented from the operating networks, and that the firmware is periodically monitored for signs of infection.

"Another important point is that there are methods to access and infect iLO both through the network and through the host operating system," the researchers noted. "This means that even if the iLO network cable is completely disconnected, there is still the possibility of infection with the malware. Interestingly, there is no way to turn off or disable iLO completely in case it is not needed."