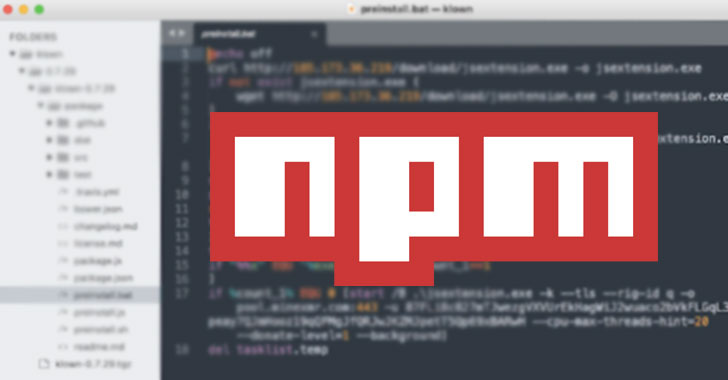 Three JavaScript libraries uploaded to the official NPM package repository have been unmasked as crypto-mining malware, once again demonstrating how open-source software package repositories are becoming a lucrative target for executing an array of attacks on Windows, macOS, and Linux systems.

The malicious packages in question — named okhsa, klow, and klown — were published by the same developer and falsely claimed to be JavaScript-based user-agent string parsers designed to extract hardware specifics from the "User-Agent" HTTP header. But unbeknownst to the victims who imported them, the author hid cryptocurrency mining malware inside the libraries.

The bad actor's NPM account has since been deactivated, and all the three libraries, each of which were downloaded 112, 4, and 65 times respectively, have been removed from the repository as of October 15, 2021.

Attacks involving the three libraries worked by detecting the current operating system, before proceeding to run a .bat (for Windows) or .sh (for Unix-based OS) script. "These scripts then download an externally-hosted EXE or a Linux ELF, and execute the binary with arguments specifying the mining pool to use, the wallet to mine cryptocurrency for, and the number of CPU threads to utilize," Sonatype security researcher Ali ElShakankiry said. 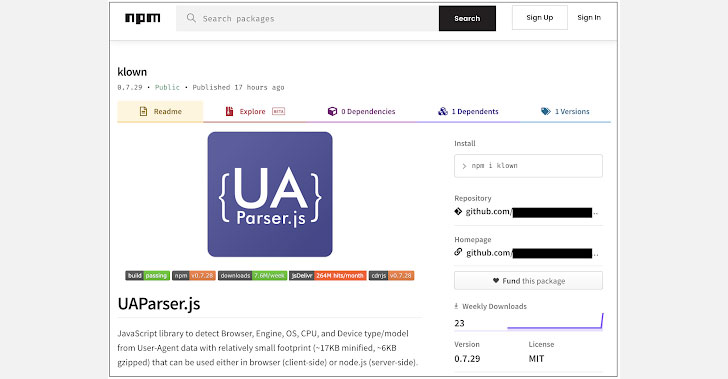 This is far from the first time brandjacking, typosquatting, and cryptomining malware have been found lurking in software repositories.

Earlier this June, Sonatype and JFrog (formerly Vdoo) identified malicious packages infiltrating the PyPI repository that secretly deployed crypto-miners on the affected machines. This is notwithstanding copycat packages named after repositories or components used internally by high-profile tech companies in what's known as dependency confusion.