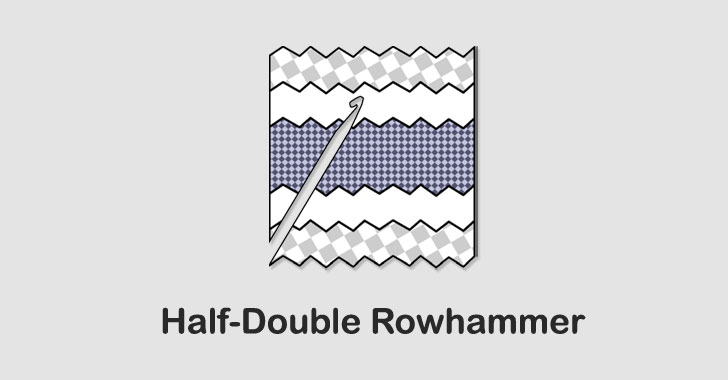 A team of security researchers from Google has demonstrated yet another variant of the Rowhammer vulnerability that targets increasingly smaller DRAM chips to bypass all current mitigations, making it a persistent threat to chip security.

Dubbed "Half-Double," the new hammering technique hinges on the weak coupling between two memory rows that are not immediately adjacent to each other but one row removed in an attempt to tamper with data stored in memory and attack a system.

"Unlike TRRespass, which exploits the blind spots of manufacturer-dependent defenses, Half-Double is an intrinsic property of the underlying silicon substrate," the researchers noted.

"This is likely an indication that the electrical coupling responsible for Rowhammer is a property of distance, effectively becoming stronger and longer-ranged as cell geometries shrink down. Distances greater than two are conceivable."

Rowhammer attacks are similar to speculative execution in that both break the fundamental security guarantees made by the underlying hardware. Discovered in 2014, Rowhammer refers to a class of DRAM vulnerabilities whereby repeated accesses to a memory row ("aggressor") can induce an electrical disturbance big enough to flip bits stored in an adjacent row ("victim"), thereby allowing untrusted code to escape its sandbox and take over control of the system.

"[The attack] works because DRAM cells have been getting smaller and closer together," Google Project Zero researchers elaborated in 2015. "As DRAM manufacturing scales down chip features to smaller physical dimensions, to fit more memory capacity onto a chip, it has become harder to prevent DRAM cells from interacting electrically with each other. As a result, accessing one location in memory can disturb neighbouring locations, causing charge to leak into or out of neighbouring cells."

While DRAM manufacturers deployed countermeasures like Target Row Refresh (TRR) to thwart such attacks, the mitigations have been limited to two immediate neighbors of an aggressor row, thus excluding memory cells at a two-row distance. The imperfect protections meant TRR defenses in DDR4 cards could be circumvented to stage new variants of Rowhammer attacks such as TRRespass and SMASH.

The distance-two assisted Rowhammer — aka Half-Double — now joins that list. "Given three consecutive rows A, B, and C, we were able to attack C by directing a very large number of accesses to A, along with just a handful (~dozens) to B," the researchers explained. In this new setup, A is the "far aggressor," B is the "near aggressor," and C is the "victim."

"To evaluate the effectiveness of a [SoC-level] mitigation, a DRAM vendor should test a mix of hammering distances rather than only testing at individual distances," the researchers said. "In other words, hammering a single row or a pair of sandwiching rows on the raw medium will not show this effect. Instead, pairs of rows on one or both sides of an intended victim need to be hammered."