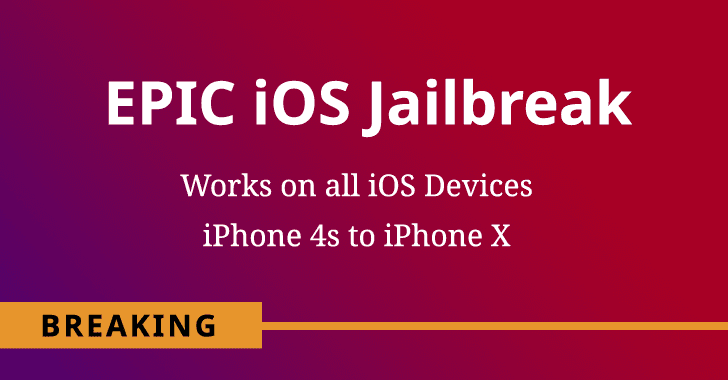 An iOS hacker and cybersecurity researcher today publicly released what he claimed to be a "permanent unpatchable bootrom exploit," in other words, an epic jailbreak that works on all iOS devices ranging from iPhone 4s (A5 chip) to iPhone 8 and iPhone X (A11 chip).

Dubbed Checkm8, the exploit leverages unpatchable security weaknesses in Apple's Bootrom (SecureROM), the first significant code that runs on an iPhone while booting, which, if exploited, provides greater system-level access.

"EPIC JAILBREAK: Introducing checkm8 (read "checkmate"), a permanent unpatchable bootrom exploit for hundreds of millions of iOS devices," said axi0mX while announcing the publicly release of the exploit on Twitter.

The new exploit came exactly a month after Apple released an emergency patch for another critical jailbreak vulnerability that works on Apple devices including the iPhone XS, XS Max, and XR and the 2019 iPad Mini and iPad Air, running iOS 12.4 and iOS 12.2 or earlier.

Since the bootrom exploits are hardware-level issues and can not be patched without a hardware revision, a simple software update can't address the newly released bootrom exploit.

It should be noted that the Checkm8 exploit itself is not a full jailbreak with Cydia, instead, is just an exploit which researchers and jailbreak community can use to develop a fully working jailbreak tool. 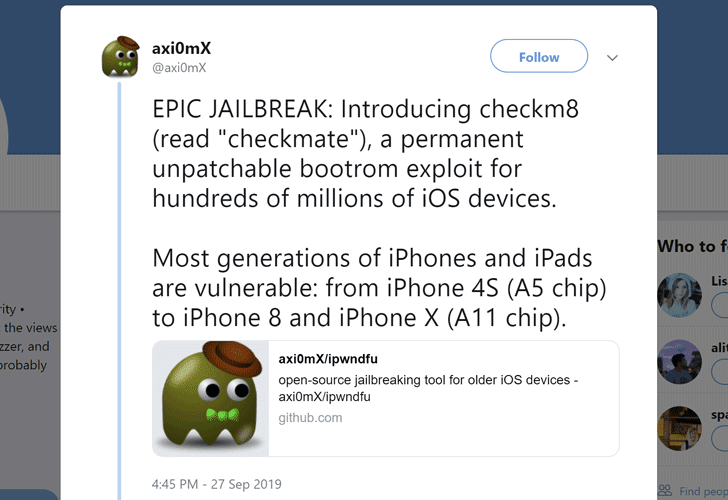 Features the Checkm8 exploit allows include as mentioned below:


"This is possibly the biggest news in the iOS jailbreak community in years. I am releasing my exploit for free for the benefit of iOS jailbreak and security research community," says axi0mX, who released the exploit on GitHub.

"Researchers and developers can use it to dump SecureROM, decrypt keybags with AES engine, and demote the device to enable JTAG. You still need additional hardware and software to use JTAG."

axi0mX also notes that his exploit can not be performed remotely. Instead, it can only be triggered over USB and requires physical access.

The jailbreak only works on iPhones running Apple's A5 and A11 chipsets and does not work on the latest two chipsets, i.e., A12 and A13.