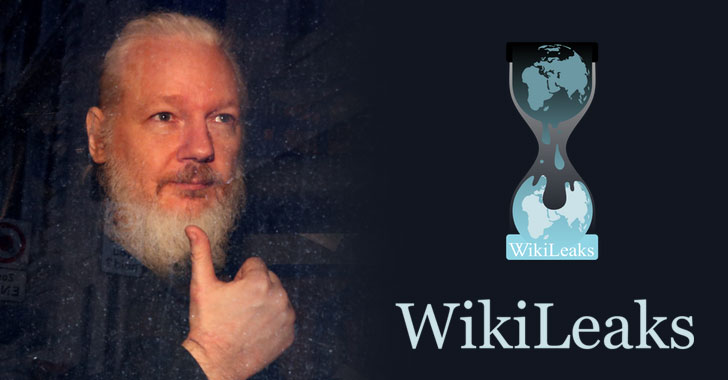 The United States Justice Department has unveiled charges against WikiLeaks founder Julian Assange with 17 new counts on the alleged violation of the Espionage Act by publishing classified information through WikiLeaks website.

If convicted for all counts, Assange could face a maximum sentence of 175 years in U.S. prison for his "alleged role in one of the largest compromises of classified information in the history of the United States."

Assange was arrested last month in London after Ecuador abruptly withdrew his asylum and later sentenced to 50 weeks in U.K. prison for breaching his bail conditions in 2012.

The 47-year-old is currently facing extradition to the United States for his role in publishing thousands of classified diplomatic and military documents on WikiLeaks in 2010 that embarrassed the U.S. governments across the world.

Though the previous indictment charged Assange with just one count of helping former Army intelligence analyst Chelsea Manning crack the password, the latest 18-count indictment accuses him of receiving and unlawfully publishing U.S. military and diplomatic documents over a dozen times, which is a violation of the old 1917 the Espionage Act.

Until now, the DoJ has only prosecuted and charged government officials who leak classified information to the media or public, but this is the first time when the 102-year-old, First World War-era Espionage Act has been used against a journalist.

The Espionage Act forbids the disclosure of national defense information that could be used against the United States or to the advantage of any foreign nation.

"Assange then published on WikiLeaks classified documents that contained the unredacted names of human sources who provided information to United States forces in Iraq and Afghanistan, and to U.S. State Department diplomats around the world," Justice Department says.


The indictment also says that Assange had "repeatedly encouraged sources with access to classified information to steal and provide it to Wikileaks to disclose."

"Assange's actions risked serious harm to United States national security to the benefit of our adversaries and put the unredacted named human sources at a grave and imminent risk of serious physical harm and/or arbitrary detention," DoJ says.


In response to the latest indictment, WikiLeaks posted a statement on Twitter calling the prosecution "madness" and "the end of national security journalism and the First Amendment," which guarantees free speech.