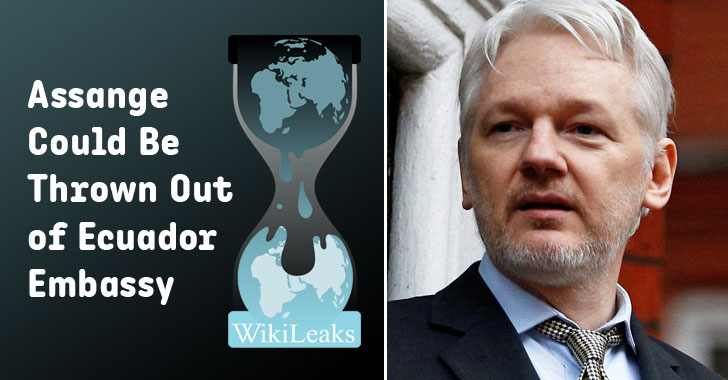 After protecting WikiLeaks founder Julian Assange for almost six years, Ecuador is now planning to withdraw its political asylum, probably next week, and eject him from its London embassy—eventually would turn him over to the British authorities.

Lenín Moreno, the newly-elected President of Ecuador, has arrived in London this Friday to give a speech at Global Disability Summit on 24 July 2018.

However, media reports suggest the actual purpose of the President's visit is to finalize a deal with UK government to withdraw its asylum protection of Assange.

According to RT editor-in-chief Margarita Simonyan and the Intercept's Glenn Greenwald, multiple sources close to the Ecuadorian Foreign Ministry and the President's office have confirmed that Julian Assange will be handed over to Britain in the coming weeks or even days.

Julian Assange, 47, has been living in Ecuador's London embassy since June 2012, when he was granted asylum by the Ecuador government after a British court ordered his extradition to Sweden to face questioning sexual assault and rape. 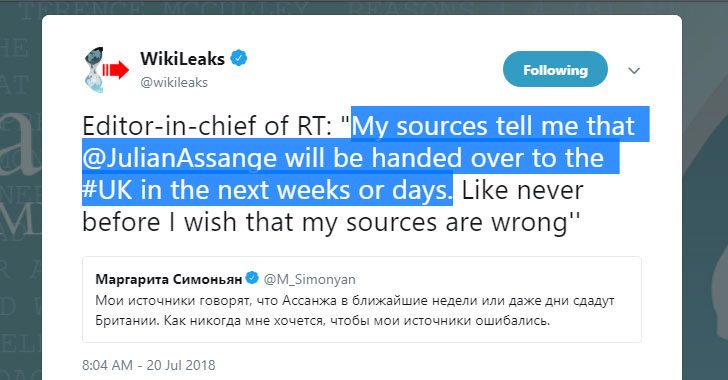 Although Sweden dropped its preliminary investigation into the rape accusation against Julian Assange just last year, Assange chose not to leave the embassy due to fears that he would eventually be extradited to the US, where he is facing federal charges for his role in publishing classified information leaked by Chelsea Manning in 2010.

Founder of the whistleblowing website WikiLeaks, Julian Assange, has not been online since last three months after Ecuador cut his communications with the outside world from its London embassy.

The Ecuadorian government took this decision in order to save its good relation with Spain after Assange tweeted in support of Catalan independence movement and blasted the Spanish government over alleged human rights violations.

According to Ecuador, Assange had breached an agreement to refrain from interfering in other states' affairs.

"Sources close to Assange said he himself was not aware of the talks but believed that America was putting 'significant pressure' on Ecuador, including threatening to block a loan from the International Monetary Fund (IMF) if he continues to stay at the embassy," RT said.

Assange is currently facing an arrest warrant from the British government for a minor charge of "failure to surrender," which carries a prison term of three months and a fine.

Now, what will be the future of Assange?