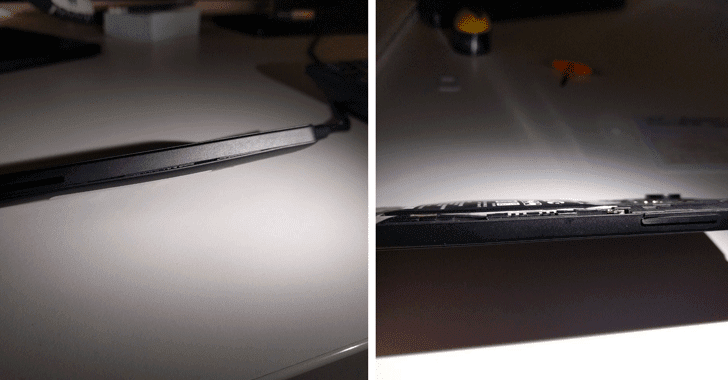 Due to the recent surge in cryptocurrency prices, not only hackers but also legitimate website administrators are increasingly using JavaScript-based cryptocurrency miners to monetize by levying the CPU power of your PC to mine Bitcoin or other cryptocurrencies.

Just last week, researchers from AdGuard discovered that some popular video streaming and ripper sites including openload, Streamango, Rapidvideo, and OnlineVideoConverter hijacks CPU cycles from their over hundreds of millions of visitors for mining Monero cryptocurrency.

Dubbed Loapi, the new Android Trojan can perform so many more malicious activities at a time that can exploit a handset to the extent that within just two days of infection it can cause the phone's battery to bulge out of its cover.

Described as a "jack-of-all-trades" by the researchers, Loapi has a modular architecture that lets it conduct a variety of malicious activities, including mining the Monero cryptocurrency, launching DDoS attacks, bombarding infected users with constant ads, redirecting web traffic, sending text messages, and downloading and installing other apps.

When analyzed a Loapi sample, Kaspersky's researchers discovered that the malware mines the Monero cryptocurrency so intensely that it destroyed an Android phone after two days of testing, causing the battery to bulge and deforming the phone cover.

A screenshot in the Kaspersky blog suggests that Loapi impersonates as at least 20 variations of adult-content apps and legitimate antivirus software from AVG, Psafe DFNDR, Kaspersky Lab, Norton, Avira, Dr. Web and CM Security, among others.

Upon installation, Loapi forces the user to grant it 'device administrator' permissions by looping a pop-up until a victim clicks yes, which gives the malicious app the same power over your smartphone that you have.

This highest level privilege on a device would also make the Loapi malware ideal for user espionage, though this capability is not yet present in the malware, the Kaspersky researchers think this can be included in the future.


Researchers also said the malware "aggressively fights any attempts to revoke device manager permissions" by locking the screen and closing phone windows by itself.

Loapi communicates with the module-specific command and control (C&C) servers, including advertisement module, SMS module and mining module, web crawler, and proxy module, for different functions to be performed on the infected device.

By connecting with one of the above-mentioned C&C servers, Loapi sends a list of legitimate antivirus apps that pose it danger and claims the real app as malware and urges the user to delete it by showing the pop-up in a loop until the user finally deletes the app.


"Loapi is an interesting representative from the world of malicious Android apps. It's creators have implemented almost the entire spectrum of techniques for attacking devices: the Trojan can subscribe users to paid services, send SMS messages to any number, generate traffic and make money from showing advertisements, use the computing power of a device to mine cryptocurrencies, as well as perform a variety of actions on the internet on behalf of the user/device," the researchers concluded.

Fortunately, Loapi failed to make its ways to Google Play Store, so users who stick to downloads from the official app store are not affected by the malware. But you are advised to remain vigilant even when downloading apps from Play Store as malware often makes its ways to infect Android users.