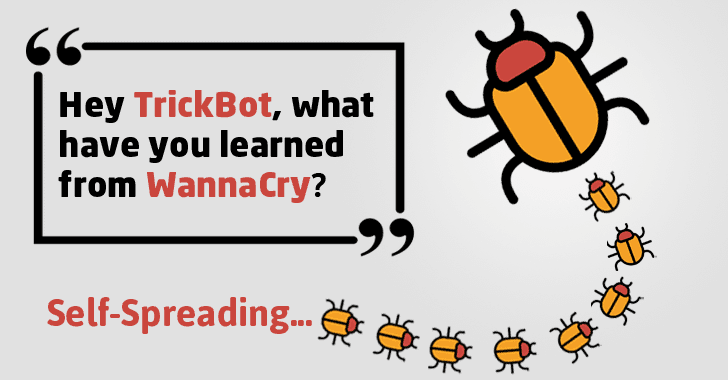 Although the wave of WannaCry and Petya ransomware has now been slowed down, money-motivated hackers and cyber criminals have taken lessons from the global outbreaks to make their malware more powerful.

Security researchers have now discovered at least one group of cyber criminals that are attempting to give its banking Trojan the self-spreading worm-like capabilities that made recent ransomware attacks go worldwide.

The new version of credential stealing TrickBot banking Trojan, known as "1000029" (v24), has been found using the Windows Server Message Block (SMB)—that allowed WannaCry and Petya to spread across the world quickly.

TrickBot is a banking Trojan malware that has been targeting financial institutions across the world since last year.

Last week, researchers at Flashpoint, who've been continually tracking TrickBot activities and its targets, have discovered that the TrickBot Trojan has just been evolved to spread locally across networks via Server Message Block (SMB).

Since the new version of TrickBot is still being tested, the new features are not fully implemented by the hacking gang behind the Trojan. It also doesn't have the ability to randomly scan external IPs for SMB connections, unlike WannaCry which exploited a vulnerability dubbed EternalBlue.

Flashpoint researchers said the trojan is modified to scan domains for lists of vulnerable servers via the NetServerEnum Windows API and enumerate other computers on the network via Lightweight Directory Access Protocol (LDAP).

The new TrickBot variant can also be disguised as 'setup.exe' and delivered through a PowerShell script to spread through interprocess communication and download additional version of TrickBot onto shared drives.

According to the researchers, the latest discovery of new TrickBot variant provides an insight into what the operators behind the malware might be using in the near-future.


"Flashpoint assesses with moderate confidence that the Trickbot gang will likely continue to be a formidable force in the near term," said Vitali Kremez, director of Research at Flashpoint.

"Even though the worm module appears to be rather crude in its present state, it's evident that the Trickbot gang learned from the global ransomware worm-like outbreaks of WannaCry and 'NotPetya' and is attempting to replicate their methodology."

In order to safeguard against such malware infection, you should always be suspicious of unwanted files and documents sent over an email and should never click on links inside them unless verifying the source.

To always have a tight grip on your valuable data, keep a good backup routine in place that makes their copies to an external storage device that is not always connected to your PC.

Moreover, make sure that you run an effective anti-virus security suite on your system, and keep it up-to-date.