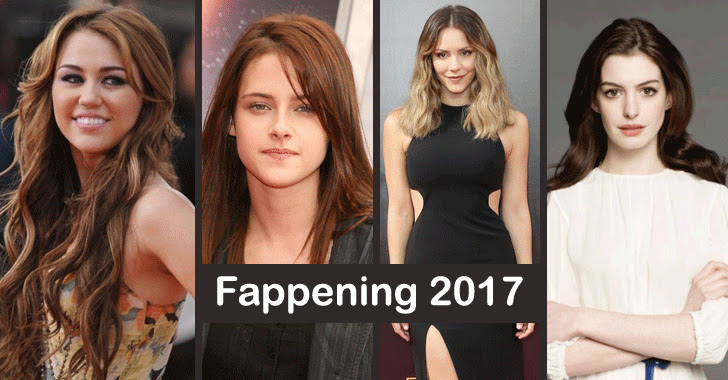 It seems like celebrities have not taken their security seriously, which once again resulted in the leaking of personal photographs of more a-listed celebrities.

Dozens of personal and intimate photos of Anne Hathaway, Miley Cyrus, Kristen Stewart, Katharine McPhee, golfer Tiger Woods and his ex Lindsey Vonn have reportedly been surfaced on the Internet, and have widely been shared on Reddit, Tumblr and Twitter.

The incident comes a few months after "The Fappening 2.0" surfaced, leaking alleged pictures of many female celebrities, including Emma Watson and Amanda Seyfried on Reddit and 4chan.

The latest release of celebs private photos seems to have come after an unidentified hacker or group of hackers has gained access to celebs' Apple iCloud accounts and stolen private iPhone photos and videos.

A similar trick was used in the 2014 Fappening incident, where anonymous hackers flooded the Internet with private photographs of major celebrities, including Jennifer Lawrence, Kim Kardashian, Kate Upton and Kirsten Dunst.

Apple responded to the 2014 hack by pledging to bolster iCloud security, and the Fappening 2014 hackers have since been sent to prison.

The compromised images were posted on the Celeb Jihad website, and the celebrities' lawyers are reported to be actively working to get those pictures taken off, but they are now being copied and shared across the internet.

The 2014 Fappening hackers used phishing to trick celebrities into entering their iCloud account credentials into bogus 'security' websites and then accessed private photographs and videos of more than 300 victims.

However, it is unclear what attack vector attackers used in the latest hack to broke into celebrities' iCloud accounts.

How To Keep Your Private Photos Private

If you are looking for the best way to keep your photos off the Internet, the simplest solution to this is—Don't click them and store them insecurely. But if you do so, there are a few steps that you can follow to minimise the risk: