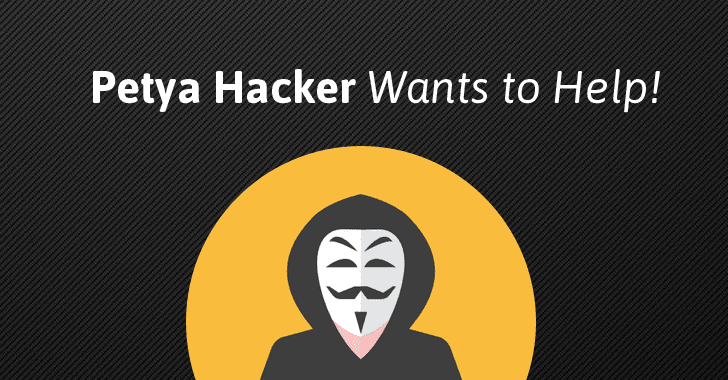 The author of original Petya ransomware is back.

After 6 months of silence, the author of the now infamous Petya ransomware appeared today on Twitter to help victims unlock their files encrypted by a new version of Petya, also known as NotPetya.


"We're back having a look in NotPetya," tweeted Janus, a name Petya creator previously chose for himself from a villain in James Bond. "Maybe it's crackable with our privkey. Please upload the first 1MB of an infected device, that would help."

This statement made by the Petya author suggests he may have held onto a master decryption key, which if it works for the new variant of Petya infected files, the victims would be able to decrypt their files locked in the recent cyber outcry.

Janus sold Petya as a Ransomware-as-a-Service (RaaS) to other hackers in March 2016, and like any regular ransomware, original Petya was designed to lock victim's computer, then return them when a ransom is paid.

This means anyone could launch the Petya ransomware attack with just the click of a button, encrypt anyone's system and demand a ransom to unlock it. If the victim pays, Janus gets a cut of the payment. But in December, he went silent.

However, on Tuesday, the computer systems of the nation's critical infrastructure and corporations' in Ukraine plus 64 other countries were struck by a global cyber attack, which was similar to the WannaCry outbreak that crippled tens of thousands of systems worldwide.

Initially, the new variant of Petya ransomware, NotPetya, was blamed for infecting systems worldwide, but later, the NotPetya story took an interesting turn.

Yesterday, it researchers found that NotPetya is not a ransomware, rather it's a wiper malware that wipes systems outright, destroying all records from the targeted systems.

NotPetya also uses the NSA's leaked Windows hacking exploit EternalBlue and EternalRomance to rapidly spread within a network, and uses WMIC and PSEXEC tools to remotely execute malware on the machines.

Experts even believe the real attack has been disguised to divert world's attention from a state-sponsored attack to a malware outbreak.

Petya's source code has never been leaked, but some researchers are still trying hard to reverse engineer it to find possible solutions.

Would this Really Help Victims?


Since Janus is examining the new code and even if his master key succeeds in decrypting victims' hard drive's master file table (MFT), it won't help much until researchers find a way to repair the MBR, which is wiped off by NotPetya without keeping any copy.

Tuesday's cyber outbreak is believed to be bigger than WannaCry, causing disasters to many critical infrastructures, including bricking computers at a Ukrainian power company, several banks in Ukraine, and the country's Kyiv Boryspil International Airport.

The NotPetya virus has also canceled surgeries at two Pittsburgh-area hospitals, hit computers at the pharmaceutical company Merck and the law firm DLA Piper, as well as infected computers at the Dutch shipping company A.P. Moller-Maersk forcing them to shut down some container terminals in seaports from Los Angeles to Mumbai.