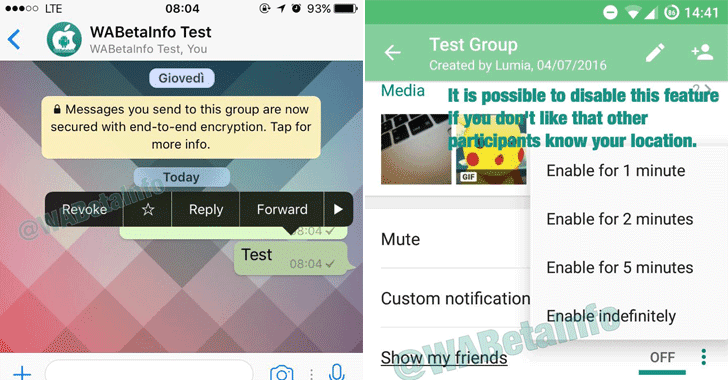 Are you the victim of sending awkward WhatsApp messages to your friends, families, and colleagues while you're drunk?

No need to panic now, as you'll soon be able to recall your drunk or mistakenly sent text messages on WhatsApp – a much-demanded feature.


The most popular instant messaging service is reportedly testing the ability to edit or completely recall messages that have already been sent, allowing you to edit or delete a message from your friend's phone if it is yet to be read.

This new feature, first spotted by Twitter account @WABetaInfo, may be included in a new beta version of WhatsApp's next update before making it into a full consumer release.

If so, the update will add "Revoke" and "Edit" options for messages with gray tick marks that have not yet been viewed by the recipient. Blue ticks on WhatsApp represents that the recipient has seen your sent messages.

However, the Facebook-owned messaging service has not officially announced the edit and recall feature, so it is unclear if or when these features will make its way to the popular messaging app's stable release.

Track Your Friends Location In Realtime

Besides giving its users more control over their sent messages, WhatsApp is also testing a new feature called "Live Location" in group chats to make it a lot easier for users to track the location of the group members while coordinating a group meeting.

WhatsApp's Live Location Tracking feature will allow users to enable other members in a group to track their location in real time. The feature will be built on WhatsApp's send your location feature, and users can opt in the feature to share their moving position for one, two or five minutes or indefinitely.

Other upcoming features being tested in the beta version of WhatsApp include the ability to reply to status messages, as well as shaking your smartphone within a conversation to contact WhatsApp and report spam.