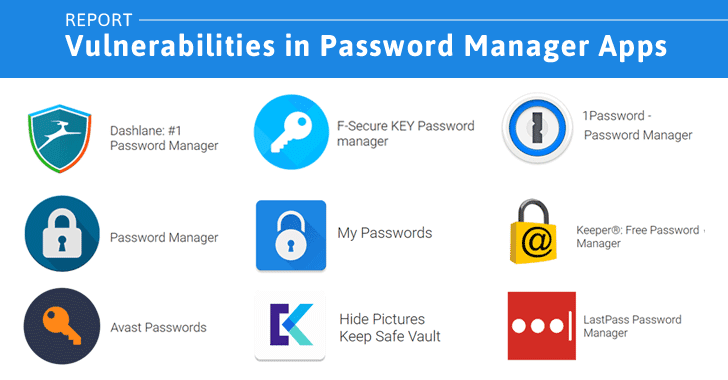 Making sure your passwords are secure is one of the first line of defense – for your computer, email, and information – against hacking attempts, and Password Managers are the one recommended by many security experts to keep all your passwords secure in one place.

Password Managers are software that creates complex passwords, stores them and organizes all your passwords for your computers, websites, applications and networks, as well as remember them on your behalf.

But what if your Password Managers itself are vulnerable?

Well, it's not just an imagination, as a new report has revealed that some of the most popular password managers are affected by critical vulnerabilities that can expose user credentials.

The report, published on Tuesday by a group of security experts from TeamSIK of the Fraunhofer Institute for Secure Information Technology in Germany, revealed that nine of the most popular Android password managers available on Google Play are vulnerable to one or more security vulnerabilities.


"The overall results were extremely worrying and revealed that password manager applications, despite their claims, do not provide enough protection mechanisms for the stored passwords and credentials," TeamSIK said.

In each application, the researchers discovered one or more security vulnerabilities – a total of 26 issues – all of which were reported to the application makers and were fixed before the group's report went public.

Encryption Keys for Master Key Hard-Coded in the App's Code


According to the team, some password manager applications were vulnerable to data residue attacks and clipboard sniffing. Some of the apps stored the master password in plain text or even exposed encryption keys in the code.

For example, one high severity flaw affected Informaticore's Password Manager app, which was due to the app storing the master password in an encrypted form with the encryption key hard coded in the app's code itself. A similar bug was also discovered in LastPass.

In fact, in some cases, the user's stored passwords could have easily been accessed and exfiltrated by any malicious application installed on the user's device.

Besides these issues, the researchers also found that auto-fill functions in most password manager applications could be abused to steal stored secrets through "hidden phishing" attacks.

And what's more worrisome? Any attacker could have easily exploited many of the flaws discovered by the researchers without needing root permissions.


Here's the list of vulnerabilities disclosed in some of the most popular Android password managers by TeamSIK:


Researcher also going to present their findings at HITB conference next month. For more technical details about each vulnerability, users can head on to the TeamSIK report.