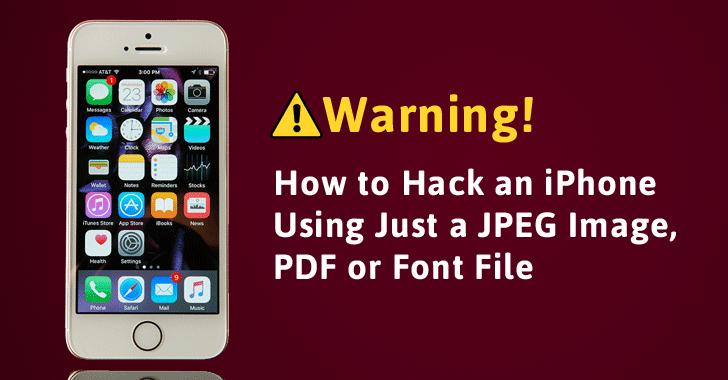 What's worse than knowing that innocent looking JPEGs, PDFs and font files can hijack your iPhone, iPad, and iPod.

Yes, attackers can take over your vulnerable Apple's iOS device remotely – all they have to do is trick you to view a maliciously-crafted JPEG graphic or PDF file through a website or an email, which could allow them to execute malicious code on your system.

That's a terrible flaw (CVE-2016-4673), but the good news is that Apple has released the latest version of its mobile operating system, iOS 10.1, for iPhones and iPads to address this remote-code execution flaw, alongside an array of bug fixes.

And now that the company has rolled out a security patch, some hackers would surely find vulnerable Apple devices to exploit the vulnerability and take full control of them.

So, users running older versions of iOS are advised to update their mobile devices to iOS 10.1 as soon as possible.

Besides this remote code execution flaw, the newest iOS 10.1 includes security updates to address 11 security flaws in the firmware for the iPhone, iPad, and iPod Touch.

Those flaws include local code execution vulnerabilities, a remote code execution bug in WebKit (CVE-2016-4677), a flaw in contacts (CVE-2016-4686) that would allow an application to pull Address Book details even when access has been revoked.

So, Mac users are advised to update their system to macOS Sierra (10.12.1), which includes security fixes for 16 CVE-listed vulnerabilities.

Those weaknesses include an image-handling bug (CVE-2016-4673), a denial of service (DoS) error in Nvidia graphics card drivers, a bug that exposed the length of user passwords and Remote Code Execution (RCE) flaws that could be triggered by font files and PDF files, among others.

Meanwhile, Apple Watch users are recommended to update their devices to watchOS 3.1, which includes fixes for 8 security flaws.

Those flaws include 2 vulnerabilities in sandbox profiles that could allow third-party apps to view image libraries and sound files without permission.

AppleTV users are also advised to update their devices to tvOS 10.0.1, which includes patches for 10 vulnerabilities, including the WebKit remote code execution flaw, the sandbox profiles flaws, and the CoreGraphics JPEG flaw.

So get your Apple device patched before getting caught by hackers.