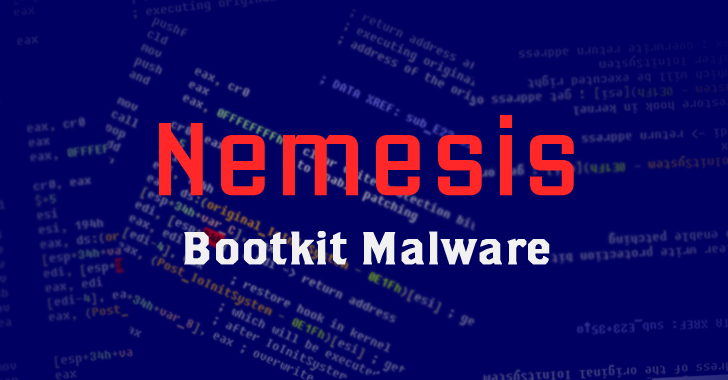 Another day, another stunning Malware – this time targeting banks, payment card processors, and other financial services.

Security researchers have uncovered a sophisticated payment card malware that executes before the operating system boots, making the malware very difficult to detect and much less remove.

The malware in question is part of "Nemesis" – a malware suite that includes all software programs for capturing screens, transferring files, injecting processes, logging keystrokes, and carrying out other malicious activities on the infected computers.

Nemesis Bootkit Malware – Reappears even after Re-installation of the OS

The malware with bootkit functionality has been in operation since early this year and has the ability to modify the legitimate VBR (Volume Boot Record) that makes the malware possible to load before Windows starts.
Moreover, the malware resides in a low-level portion of a hard drive.

"The malware that persists outside of the operating system (OS) requires a different approach to detection and eradication," security analysts from FireEye wrote in a blog post published Monday.

"Malware with bootkit functionality can be installed and executed almost entirely independent of the Windows [OS]. As a result, incident responders will need tools that can access and search raw disks at scale for evidence of bootkits."

How Does the Malware Work?

Early this year, the cyber criminals tweaked Nemesis to include a utility called BOOTRASH that has the ability to modify an infected computer's boot process.

In a normal boot, any Windows PC reads data from a hard drive's MBR (Master Boot Record) that loads the VBR – a piece of code specific to an operating system containing instructions for the OS to begin the boot process.

The VBR then normally loads the operating system code, but BOOTRASH loads:
Since BOOTRASH is loaded outside of the machine's OS, it is not subject to any kind of integrity checks, nor are any of its components scanned by system's Anti-Virus program, which helps the malware evade detection.

According to the researchers, versions of BOOTRASH are targeting both 32-bit and 64-bit Windows architectures. Moreover, due to this newly added Bootkit component, reinstalling the OS will not remove the Nemesis malware.

"We identified the presence of a financially motivated threat group that we track as FIN1, whose activity at the organization dated back several years," FireEye researcher wrote. "The threat group deployed numerous malicious files and utilities, all of which were part of a malware ecosystem referred to as 'Nemesis' by the malware developer(s)."

The researchers believe that the FIN1 hacking group used this malware, most of the times, to access victims environment and steal cardholders data. In the past, the researchers came across different versions of the Nemesis family when they analyzed FIN1's malware.

How to Protect Your Systems From Nemesis Bootkit Malware?

Re-installing the operating system of your Windows machine is not a sufficient method to get rid of this malware.

The solution against this malware threat is to use software tools that can access and scan raw disks at scale for evidence of Bootkits, or physically wipe the disks before reinstalling the operating system.

"System administrators should perform a complete physical wipe of any systems compromised with a bootkit and then reload the operating system," FireEye researchers recommend.

In the past, researchers detected malicious threats such as TDL4 (Olmarik), Rovnix, Necurs, and Carberp. Among these, Carberp banking trojan targeted financial institutions.