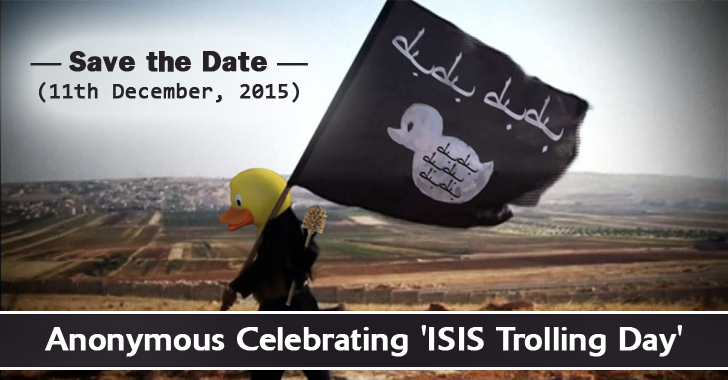 After hacking and taking down social media accounts of ISIS members, the online Hacktivist group Anonymous is back again with its new plan to harass the Islamic State (IS) militant group that was behind the horrific terror attack in Paris.

Anonymous declared total war against ISIS after the last month's Paris attacks and supposedly:
Now, the hacktivist group has declared December 11th to be "ISIS Trolling Day," planning an organized trolling campaign against ISIS by assaulting their image through Photoshopped images, memes, videos and jokes related to the terrorist organisation.

Also Read: ISIS Issues 5 Lame Tips for its Members to Avoid Getting Hacked

This campaign is also part of the group's ongoing effort to disrupt and dishonor the ISIS terror organization's online presence.

Western-living Muslims usually fall for ISIS' intimidating social media propaganda, so rebranding the militant group as a joke may be one of the best ideas Anonymous hackers ever had – attacking the ideas that ISIS is trying to spread online.

Anonymous has also asked netizens to be part of this trolling campaign as an effort to mock ISIS members and supporters for "the IDIOTS they are."

Here are some of the campaign goals:

Now, let's see what kind of real impact this campaign will make at the end of the day, but free speech and taunt can be a way more powerful tool when fighting a war of ideas.