My Government Doesn't Understand How Encryption and Cyber Security Work 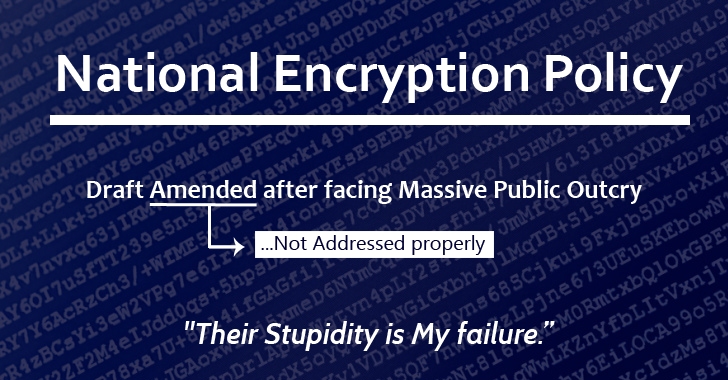 Almost every day or every second day, When I come across various announcements in Newspaper, TV News Channels, and Press releases that...

...Indian Government and related Policy-making organizations are going to set up their so-called "CyberSecurity Task Forces" or drafted a "National Cyber Security Policies," with an aim to boost cyber security in India…

The first thing that comes to my mind is:

Why Doesn't my Government Understand How Encryption and Online Cyber Security Works?

Yes, My Government really have no idea, How Encryption relates to users' Privacy. And… Narendra Modi's Government has done it again!

The National Encryption Policy (before addendum) required:
Yes, besides Indian Service Providers, the draft policy forces Service Providers outside of India to sign an agreement under which the Indian government will prescribe the Encryption algorithms and key sizes.

So, DeitY expects thousands of Foreign Service Providers that encrypt its users' data to put the government backdoors into their secure software — similar to what the NSA did for spying on US citizens.

DeitY believes that this would enhance cyber security in India. Oh! Really? Looks like the experts have got it all wrong.

However, after massive public outcry, the government has withdrawn the draft proposal and issued an addendum to the National Encryption Policy which says:


The proposed National Encryption Policy would apply to everyone including government departments, academic institutions as well as citizens, and for all kind of communications…

It seems like the Indian government has once again proven itself to be zero in knowledge about the issues related to Privacy and Online Security.

At The Hacker News, our agenda is to educate the world for Cyber Security. However, in the country from…

…where The Hacker News operates, where our own government is releasing such policies in the name of cybersecurity, we feel like a Failure, for which We Really Apologize!

Any updates on the topic will be added to the article to keep you informed.