This MicroSD Card Has Entire Secure Computer Inside It 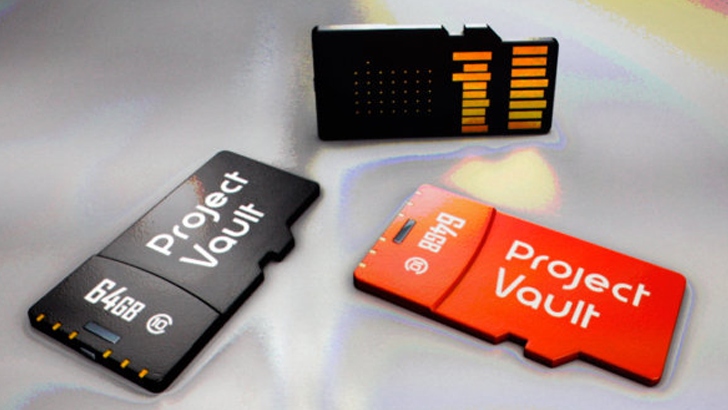 As Millions of Hackers, Spammers and Scammers are after your sensitive online data, you can't really expect your passwords to stay secure forever, even if you are using long passwords.

Most of us might be worried about losing our passwords as we keep signing up for online services.

However, Google is equally concerned about your online security and wants to help you protect your most sensitive data in a most smarter way.

Google has now made what has to be one of the smallest computers ever — Project Vault.

That's a really catching name announced on the second day of the annual Google I/O developers conference on Friday.

Project Vault, designed by Google's ATAP (Advanced Technology and Projects) group, is a secure computer entirely packed onto a microSD card that can be plugged into any system whether it's a desktop or a mobile phone.

The vault is technically a computer though it is not for regular computing. Rather it is a new and secure way to communicate and authenticate without entering passwords.

Today we often choose passwords that we find clever or easy to remember, but Google wants to make the password more personal than we think.

The tiny little chip can authenticate you even before an app or a website asks for your password. In short, Vault will make your primary authentication (which we currently do use passwords) a secondary one, without you having to do anything.

With Project Vault, Google will turn your devices into your passwords. It is capable to encrypt, or scramble, your app is chat messages and provide extra levels of authentication, so your device makes very sure that you are you.

While giving a demo, ATAP team showed how two users can securely chat with each other using Vault-equipped smartphones. Once the chip is installed, the chat application just opens the virtualized two-file system with the read/write I/O.

Vault encrypts the chat messages and then sends it as ciphertext through its encrypted channel, and never sends through the phone so that no one can snoop on you. The phone automatically decrypts the messages, but will never actually be able to see any keys or algorithms on either end.

The company says you will also be able to encrypt video with Vault.

Vault runs a custom-built Real-Time Operating System (RTOS) with a suite of cryptographic services, including hashing, batch encryption, signing and a hardware random number generator, in order to keep your data and messages with friends secure.

Vault works with any operating system -- including Google's Android, Windows, Linux and Apple's OS X -- since essentially it is just a generic storage device to the host computer or phone.

I called the move smarter because here all the work is done by the host without the users having to deal with the configuration of the device, making it as user-friendly as possible.

Project Vault is still "very much in the experimental stage" and in process of being ready for users, but the source code for the system is available on GitHub under an open-source license so that developers can start delving into it.